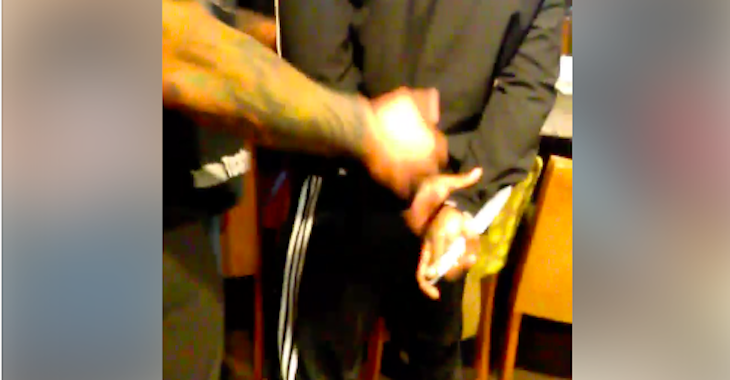 Last night, UFC, World Series of Fighting, and Bellator veteran Melvin Guillard made a bold jump into the world of bareknuckle boxing, and actually did very well, knocking his opponent Dan Breeze out with a violent volley of punches.

See Guillard’s finish, which occurred in the United Kingdom, below:

While Guillard’s win in the bone-on-bone world of bareknuckle boxing was certainly impressive, it appears as though it was not the only skirmish he was involved in during his visit to the UK.

On Sunday morning, UFC and WEC veteran Shonie Carter posted a video of Guillard getting into it with another bareknuckle boxer, Jimmy Sweeney, in a restaurant. In this video, Guillard can be seen holding a knife behind his back. Though this appears to be a table knife, things were obviously getting very heated.

See the video of Guillard’s intense showdown with Sweeney and his team, which was shared to Carter’s Facebook page, below:

UFC veteran Wes Sims, who was present at the time of this incident, confirmed to BJPenn.com’s Tom Taylor that the knife-wielding party in this video is in fact Guillard.

“Yes Tom, I was there that is Melvin,” Sims explained. “Yes he has a butter knife in his hand, yes Shonie Carter filmed, and yes we would have stomped the shit out of those Irish! Good times in the U.K. [It] is quite difficult finding a good meal though, as you see!

This incident follows yet another heated, public encounter between Guillard and Sweeney, which was captured by Sims. In this encounter, Guillard can be seen grilling his adversaries, threatening them from across the street.

“I’ll dump your f*cking skull in the street right here,” he says in the video. “You a p*ssy boy, I’m gonna show you what America is.”

See this intense moment, which was shared to Sims’ Facebook page, below:

What do you make of this intense encounter involving Melvin Guillard, Shonie Carter, and Wes Sims? Sound off, PENN Nation!

UPDATE: Apparently, the two parties were able to squash their beef after this incident. Peace prevails!