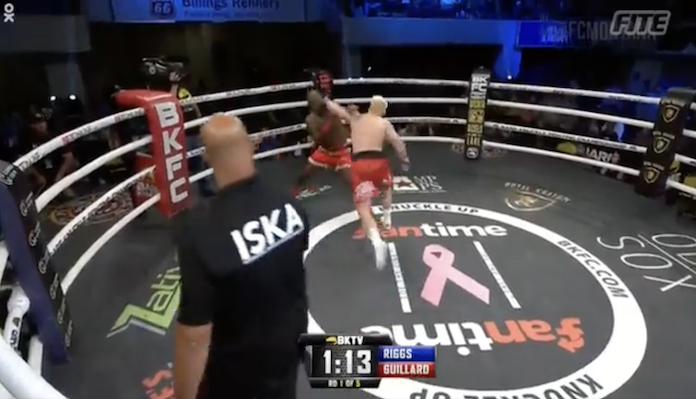 Former UFC fighter Melvin Guillard was brutally knocked out with one punch by veteran Joe Riggs in a BKFC match that took place this weekend.

Guillard and Riggs were former UFC stars, but in the latter stages of their fighting careers, both men are now signed to BKFC. For Guillard, he is now 38 years old and was winless in his last 13 combat sports bouts. While Guillard was once one of the top lightweight fighters in MMA, that was over a decade ago. Now 20 years into his fighting career, Guillard is no longer the same explosive KO artist he once was. In fact, he is now the one who is getting knocked out. And on Saturday, he was brutally knocked out yet again, this time by Riggs.

Take a look at the video of the brutal one-punch KO Riggs landed on Guillard at BKFC Fight Night. It was Guillard’s fourth straight loss since joining BKFC. Check out the video below.

Before the fight even started, there was concern among fans on social media given how poorly Guillard has performed as of late. Although he was once a feared fighter in MMA, Guillard is getting knocked out cold in almost every single fight he is in these days. It is scary to think what could happen to him if he continues to fight given what happened recently to Justin Thornton, another BKFC fighter who died not long after being knocked out in the ring. Two months later, Thornton passed away, and now fans and media are wondering why that fight was even allowed to be booked in the first place. Seeing Guillard get knocked out like this after Thornton passed away is even more concerning for fans.

So a fighter, Justin Thornton, just died after his fight in BKFC and now Melvin Guillard is headlining their card tonight. What the hell man. This guy should not be fighting. Praying nothing bad happens to him tonight. pic.twitter.com/IahNqGSzRg

What do you think is next for Melvin Guillard after suffering a brutal KO loss to Joe Riggs?