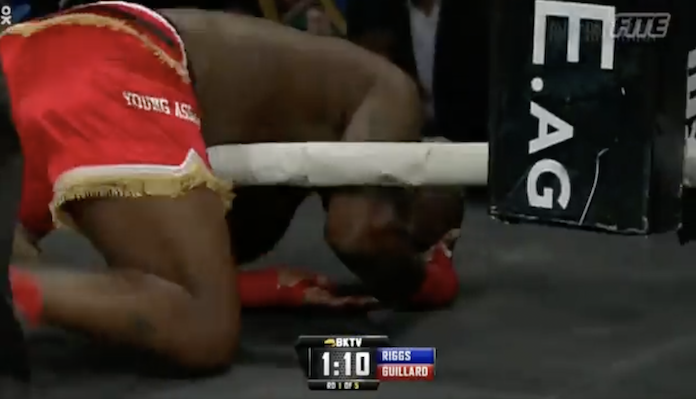 Guillard took on Riggs in a bare-knuckle boxing match in Billings, Montana on Saturday night. Riggs won the fight early in the first round when he caught Guillard with a big punch that sent him through the ropes. It was a huge punch, and Guillard immediately collapsed to the mat and held his face. It turns out that Guillard ended up breaking his orbital bone.

“The Young Assassin” took to his social media following the fight with Riggs to share a series of photos from the hospital and share a statement with his fans. In the statement, Guillard confirmed that he suffered five fractures of his orbital bone and he will be having surgery today to fix it. Guillard also admitted that he was scared when he heard the news.

Just found out at 3:15 a.m. I have five fractures in my orbital so I will be having surgery today just wanted to get my fans friends and family the news I’ll be okay just keep me in your prayers I’ll be lying if I said I wasn’t a little scared right now we’ll see what happens.

With the loss, Guillard dropped to 0-4 in BKFC. He has lost his last 15 straight combat sports matches, with knockout losses to the likes of Israel Adesanya, Takanori Gomi, and Muslim Salikhov during that stretch. At one point in time, Guillard was a top-rated lightweight contender in the UFC. However, that was a decade ago, and at age 38, it appears Guillard is in the last stages of his career. Unfortunately, he broke his orbital bone against Riggs, but hopefully, surgery is successful and Guillard makes a speedy recovery.

We here at BJPenn.com wish Melvin Guillard the best as he recovers from this broken orbital bone suffered in his BKFC fight.