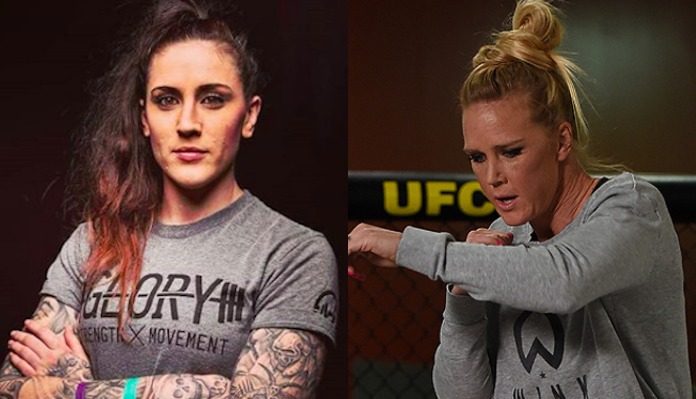 This awesome booking was first reported by the Chicago Tribune.

Anderson (8-2) was briefly linked to a showdown with Cris Cyborg in mid-2017, but was forced out of the contest with personal issues. Since then, she’s repeatedly called for a do-over with the women’s featherweight champ, criticizing Cyborg’s habit of fighting beefed-up bantamweights, and referring to herself as an “actual featherweight.”

Anderson will enter her UFC debut on a four-fight win-streak, composed of TKO victories over Amber Leibrock, Amanda Bell, TUF veteran Peggy Morgan, and WMMA veteran Charmaine Tweet. Her last loss occurred in 2015, when she was submitted by Cindy Dandois.

Holm (11-4), meanwhile, last fought in December, when she gave up a decision to the champ Cyborg. In her next most recent fight, Holm put former women’s bantamweight title challenger Bethe Correia down with a third-round head-kick. This win was preceded by close losses to Germaine de Randamie, Valentina Shevchenko, and Miesha Tate, which marked the end of her reign as women’s bantamweight champ.

Other highlights of the card include a heavyweight showdown between Curtis Blaydes and Alistair Overeem, and the rumored return of CM Punk, who is expected to take on Mike Jackson on the card.

Who do you think comes out on top in this newly announced Megan Anderson vs. Holly Holm showdown?