Cory Sandhagen calls for a showdown with Marlon Vera next: “That’s what a lot of fans want to see”

UFC bantamweight contender Cory Sandhagen would like a clash with Marlon Vera next.

‘The Sandman’ is fresh off his UFC Vegas 60 main event with Song Yadong. The bout was an important one for the former title challenger. Heading into the headliner, Sandhagen had two straight bouts against T.J. Dillashaw and Petr Yan.

The main event wound up being a great bounceback victory for the 30-year-old. Sandhagen busted up Yadong’s face en route to a fifth-round stoppage win. Following the win, it seems that the former title challenger has a name in mind.

Cory Sandhagen discussed a bout with Marlon Vera in an interview on The MMA Hour with Ariel Helwani. There, the bantamweight contender stated that the matchup with ‘Chito’ makes sense for many reasons. One of the main reasons is that the fans want the fight.

Beyond that, the Colorado native stated that the bout makes sense because his foe has called for a top five opponent. That, combined with fan interest, makes Sandhagen believe that’s the fight to make.

The 30-year-old also stated he would prefer that matchup, as opposed to one with Merab Dvalishvili. ‘The Machine’ is coming off a decision win over Jose Aldo last month at UFC 278. 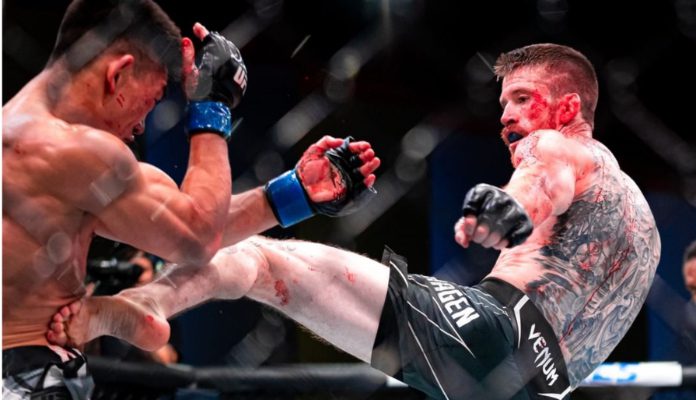 “I think Chito makes more sense man.” said Cory Sandhagen. “I don’t mind the fight with Merab either, but Chito has a lot more pull behind him. He’s coming off a big win against [Dominick] Cruz, an impressive win against Cruz too, and he’s finishing people. Honestly, from what I’ve seen on social media, it’s what a lot of fans want to see, too.”

He continued, “After Chito beat [Rob] Font, he called out guys in the top five. Then, he went and fought backwards… I think Chito definitely should have one more [fight before a title shot]. If it’s against me, that would be fantastic for the both of us.”

Do you want to see Cory Sandhagen vs. Marlon Vera? Sound off in the comment section below!

This article appeared first on BJPENN.COM
Previous articlePaulo Costa believes he stole Khamzat Chimaev’s hype after UFC 279: “Motherf*cker I stole everything you had”
Next articleNate Diaz reveals boxing Jake Paul “is for sure one of the options” he’s exploring in free agency
© Newspaper WordPress Theme by TagDiv