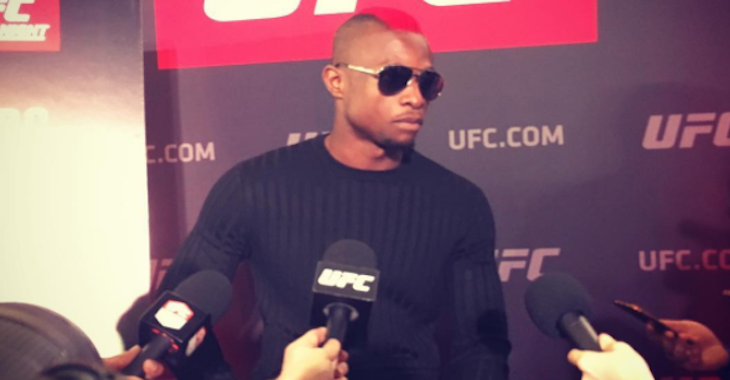 Earlier this year, when the UFC touched down in London, England, undefeated lightweight prospect Marc Diakiese picked up one of the best knockouts of 2017 thus far, one-punching Teemu Packalen just 30 seconds into the first round of the fight. With this win, Diakiese moved to an impressive 12-0, and set himself up for a big step up in competition.

For a time, it looked as though he’d get that step up in competition, as he and established lightweight striker Paul Felder began engaging in a heated war of words in interviews and on social media.

“He’s just a f—ing little Irish wannabe, because I don’t even know who he is, he’s just talking crap,” Diakiese said during an appearance on The MMA Hour. “I beat his teammate Frankie [Perez], and now he’s coming forward. Like I said, I don’t mind, I’ll fight anybody, but he’s one of these guys, he’s experienced, he’s a veteran. If I were to beat him, I’d look good.

“I want to smash his face in front of his own people. That’s my plan.”

The two even agreed to a fight on Twitter.

As it turns out, however, the UFC has decided to go another direction with Diakiese’s career, pitting him against fellow undefeated prospect Drakkar Klose (7-0-1) instead of Felder. The two prospects will fight at The Ultimate Fighter 25 Finale on July 7 in Las Vegas.

Given the way that Diakiese and Felder – two of the flashiest strikers at lightweight – match up, it’s hard not to wonder why the UFC chose to pit Diakiese against Klose. That said, Klose is a dangerous test in his own right, and should provide the rising Diakiese with an interesting challenge.

Do you think the UFC dropped the ball by not pairing Marc Diakiese with Paul Felder? Who wins this Diakiese vs. Klose fight?