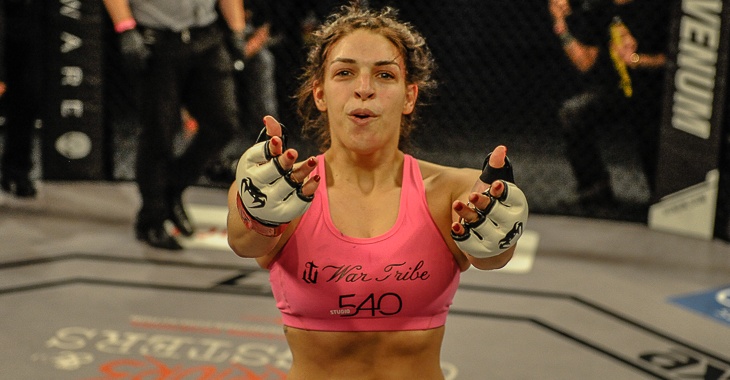 Everybody loves to be the person who stops a so-called ‘hype train’. They’re those cases where one gets to prove that maybe they’re the ones who deserved some of the spotlights over those who were hogging it all up(whether by their choice or not).

In this case, it’s fair to say that highly touted young prospect and BJJ wizard, Mackenzie Dern has herself a bit of a hype train rolling and she even admits it. So why wouldn’t her next opponent, Amanda Cooper be wanting to stop that?

Dern spoke to Submission Radio recently and understands the risk that comes with being a hyped up young fighter.

“I don’t know. I didn’t know who she was until like just recently. So, I mean, I don’t know her background. I think she’s maybe, she’s like a boxer? But I think probably like maybe she heard of me before, and me being like a Jiu-Jitsu person and her being a stand-up person. You know, I think even when I was outside the UFC, anyone who was fighting me, sometimes I knew they wanted the fight but I knew it was more for the publicity and the attention behind it.

Like, for sure I think she has less to lose in the fight than me. So, if she beats me, like man, that’s awesome, she stopped the hype train and everything. If she loses, it’s like not a big deal too. It’s like, OK, whatever. So I think for her she can just, it would be good if she can stop the hype, it would make it even better for her and her career and everything. But like I said, I didn’t really know anything about her before. So I kind of take it as a compliment that she had heard about me and that was training for me. I think that’s great *laughs*.”

Although Dern says she didn’t know who ‘ABC’ was, she must have done a little bit of research recently to make this prediction heading into UFC 224:

UFC 224 takes place in what Dern considers one of her homes, Brazil. And she is very excited to get the chance to make her sophomore appearance for the UFC there.

“Ah, man, I’m so excited about it. Like you said, it was exactly that. Like, when I saw that they would have the card in Brazil, in Rio – and not just in Brazil, but like specifically in Rio, it was so great. I was like, man, we have to get on that card. They asked me if I wanted to, and I said, yes, of course. So I’m very excited for it. I think it will be like a very great fight. Everyone else is there. Vitor Belfort, Lyoto Machida, Amanda Nunes. So many great people will be there. So I’m so excited for this. I think I’m excited to see how it will be the fight.

I’m fighting Amanda Cooper. You know, she’s American, so I think it will be fun. It will be fun to be able to represent Brazil and just, I was able to fight in Vegas and now Brazil, so I’m happy I get the best of both worlds.”

May 12th is the day that the action will go down and Dern doesn’t have an easy task in front of her with Cooper. Will she be able to stay unbeaten and keep the momentum rolling?