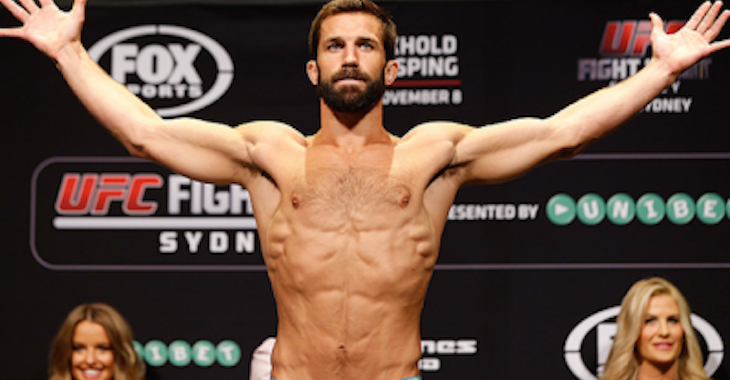 This September 16, in the main event of the UFC’s return to Pittsburgh, PA, former Strikeforce and UFC middleweight champ Luke Rockhold will return from a long hiatus opposite former two-division World Series of Fighting champion David Branch.

Speaking to Duane Finley of FloCombat.com, Rockhold shared his thoughts on this upcoming scrap with Branch. Apparently, he’s not a huge fan of the former WSOF titleholder.

“To be honest, I really don’t know much about [Branch],” Rockhold said. “I’ve watched him fight a couple times. He tries to act hard like he’s from Brooklyn but dude fights like he’s from the Hamptons. He’s a technical fighter, but I’m going to beat him everywhere. I’m going to make the man fight, and it’s not going to take long for him to realize how outclassed he is in there.”

Rockhold then shed some light on how he sees the fight going. The former champ is confident no matter where the fight unfolds.

“I’ll stick to my game and let the fight do the talking, because when I fight my fight there’s not a man in the game who can keep up with me. I just don’t see it. I’ve been around the world and haven’t found a man who can keep my pace and stay with me. Whether on the feet or the ground, there isn’t anywhere I can’t fight.

“I’m going to prove who I really am when I come back. People want to talk and doubt me, and they can think whatever they want. I’ll show who I really am and what I can do shortly.”

And of course, it wouldn’t be a 2017 Luke Rockhold interview without a jab at his arch-rival, middleweight champ Michael Bisping. The former champ, who relinquished the title to Bisping in June of 2016, shoehorned the following into his chat with Finley:

“I’m here to get back in the mix and take out the fucking chump who is at the top. He’s not the champ… he’s a chump.”

Do you expect Luke Rockhold to reclaim the middleweight title?