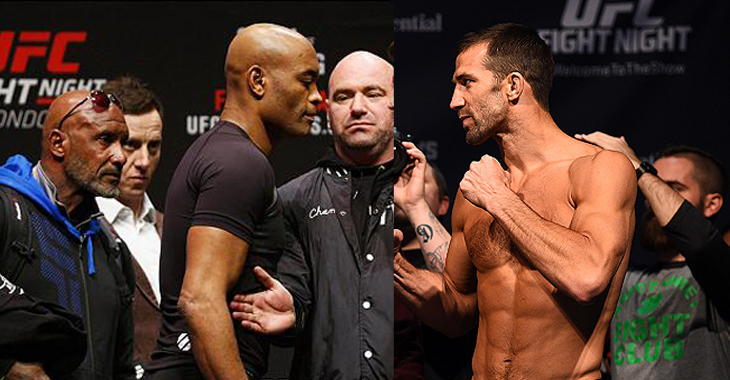 Right now, former UFC middleweight champion Luke Rockhold is undergoing treatment for an injured knee. Once fully healed up and healthy enough to get back in the gym, Rockhold says that there is one particular fight that he is looking to get with Michael Bisping already booked and set to defend his title against Dan Henderson.

“There’s a guy I’ve always wanted to fight and that’s Anderson Silva,” Rockhold said on ESPN Radio (transcribed by Fight Sports). “I think Anderson Silva is still in the division, he’s still obviously relevant. He has a controversial loss to Bisping, and I had my loss to Bisping, and then obviously fighting my teammate [Daniel Cormier at UFC 200] on short notice. I think he’s still very relevant and it’s a fight that would make a lot of sense. And it would be a fun one to do. Looking at the division, that makes the most sense.”

Another name that came up was Vitor Belfort who was also just booked for a fight with Gegard Mousasi. Rockhold says that Belfort comes second to Silva, but will be more than willing to dump both of those bouts to take a short notice fight with Bisping if Henderson happens to get injured and is unable to compete.

“I’ll be ready for a last-minute replacement if Dan were to trip and stub his toe,” he said. “There’s nothing I would love more than to step in on short notice and fix this.”