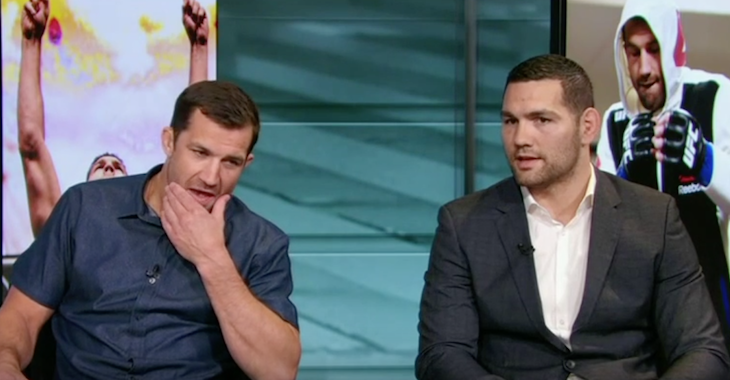 Chris Weidman and Luke Rockhold both were guests on Monday’s episode of The MMA Hour.

Weidman, who was forced to pull out of the title rematch against Rockhold due to injury opened up the opportunity for Michael Bisping to get his first chance to fight for a UFC championship belt.

Weidman said that by pulling out of the fight, he gave “two gifts” to Rockhold. One being “Bisping on a silver platter” and second, the “easiest title fight in the history of title fights.”

Helwani asked Rockhold who was a guest later on the show who he thinks makes for an easier fight between Weidman and Bisping.

“I think he [Weidman] might have been easier,” Rockhold said. “My opinion, Bisping is just a little bit funner, more tactical. I’m gonna enjoy it more. It’s gonna be funner for the fans. You know, Weidman kind of just fights ugly and fights with his balls, comes forward and might get a little bit sloppy, but I can pick him off fairly early. I think he overextends. But, Bisping, I can play around with a little more with him and pick him off you know, here and there and find the kill shot.”

Rockhold says he likes fights that are more tactical, which is what Bisping brings.

“Weidman just kind of fights like an idiot. He just f***ing runs forward and exposes himself and kind of overcommits and relies on his toughness. Bisping tries to make it more tactical and I enjoy that, that process of finding my shots and outdoing him, outsmarting him in the cage and putting him away.”