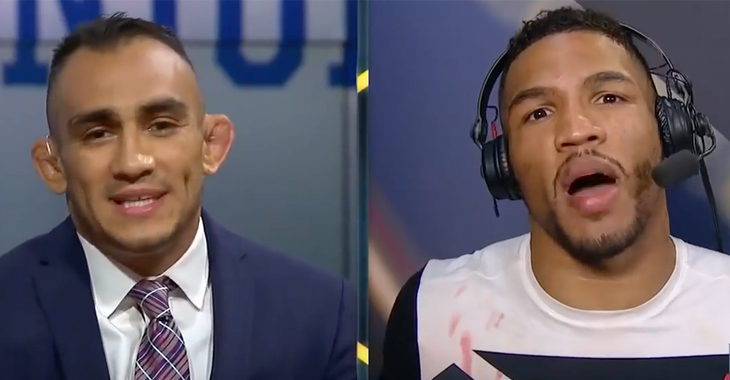 Fighting any opponent is more than just what they can do to you in the Octagon. It always has been. As the sport grew more popular, now it’s more different than ever. Kevin Lee just didn’t have to deal with preparing for Tony Ferguson’s unorthodox techniques, but endure social media trash talk, being around him for media obligations, and dozens and dozens of interviews. It’s a normal thing to not like what you’re opponent says, but much like Conor McGregor, going through the war of words with Tony Ferguson is a whole different ball game because of how… unique he is.

“Yeah, [Tony Ferguson]’s a weirdo. Like I said, I hit you with facts. He comes up with all these scenarios in his head. I told him, he’s gotta’ stop smoking whatever it is you’s smoking, bro. I don’t know, he be on some — I just let him do what he do. He talk about how I’m a fake and all this but, let’s be honest, the man’s a Mexican from Michigan and he can’t even speak Spanish. So, it is what it is, he’s a weird dude. I don’t really like going back and forth with him. It’s kind of frustrating, I think you can even see it on my face.”

Kevin Lee on the side-by-side interviews that he did with Tony Ferguson yesterday and why he looked so perplexed. pic.twitter.com/2INTPFLphn

“I’m just like, ‘bro, what are you talking about?’ They asked him a question about [Conor] McGregor and he’s bring up something — I don’t think he’s really listening, it’s just he a weird dude and it’s hard talking to stupid people a lot. You can’t reason with stupid people, you know what I’m saying’? So, when I tell him something, it’s like he already got — I don’t know, bro. So, I just let him do what he do. Like I said, he been doing all the talking during this fight. I let him do all the talking during the media. I’m going to go out there on Saturday night and show it’s not all talk. People can say what they want to say. They can say I’m number six, they can say I’m number seven, they can say I’m number 70. After this one, I’ll be number one and there’s no denying that. Tony Ferguson’s always been the toughest fight, and there’s no denying me after this fight.” — Kevin Lee speaking with Aaron Bronsteter from TSN Sports.

Call him weird, call him peculiar, Tony Ferguson is no one but Tony Ferguson. He constantly brings up mental warfare, so it’s no doubt it’s on his mind during a fight. Evne back at UFC 209, he was talking to Khabib Nurmagomedov about his weight cut and how he though his conditioning sucked. Not only that, but just dealing with such a chaotic personality is work for his opponents to be around. In just one day, Kevin Lee and Tony Ferguson both will end all the talk and settle it for an interim lightweight title at UFC 216.