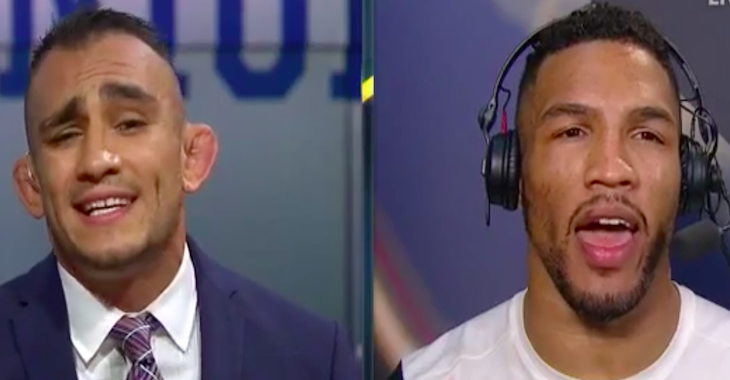 Last night, in the main event of UFC Fight Night 112, Kevin Lee scored an impressive – if controversial – submission win over Michael Chiesa. Shortly after this win, which is likely to send him careening into the UFC lightweight top-10, Lee joined a panel of Karyn Bryant, Kenny Florian, Tyron Woodley and Tony Ferguson on Fox Sports 1 to discuss the fight.

It did not take long for Lee and Ferguson – who stands out as the top lightweight not named Conor McGregor – to start going at it.

“Can we put a real journalist on?” Lee said after Ferguson asked him about Michael Chiesa’s first-round slam (h/t Fox Sports). “Before the fight you was saying I had my left hand down, he was going to hit me with the right hand and he’s a southpaw. Let’s throw on a real journalist. I don’t even know if he really watches the fights. You think I train over at [Floyd] Mayweather’s gym doing boxing only or not doing wrestling. I don’t understand this.”

“Congratulations to your fight, but you’re calling out Khabib [Nurmagomedov], you’re just like Al Iaquinta, I can’t understand anything that you say,” Ferguson fired back. “All that you’re saying is just a whole bunch of hoopla. You need to get in line. You need to take a ticket. You need to bleed a little bit.

“You need to go through guys like Edson Barboza, Rafael dos Anjos, you’re just barely breaking into this whole thing,” Ferguson continued. “You don’t want nothing to do with these things right here, especially elbows, knees and kicks.”

“You can get it in,” Lee replied. “We can get it in, in December. It ain’t nothing. You talking like I ain’t never turned down nobody.”

See Lee and Ferguson’s heated post-fight exchange in full below:

Q&A: The @MoTownPhenom Kevin Lee called out Khabib Nurmagomedov AND suggested @tonyfergusonXT can get it too! https://t.co/051Hqz3Wbp

Who do you think wins a fight between Kevin Lee and Tony Ferguson?