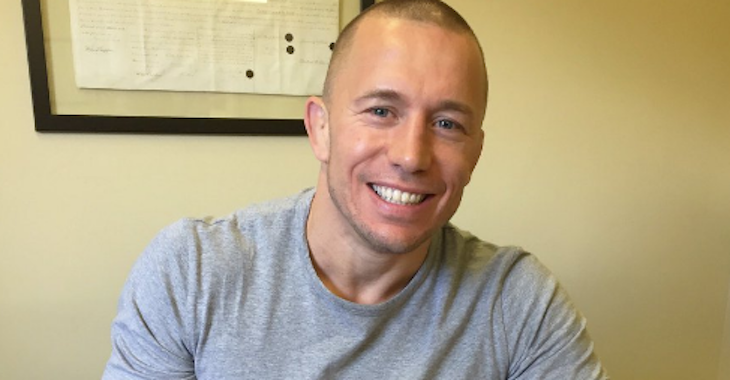 Georges St-Pierre and Stephen Thompson have created a hilarious Will Smith-Chris Rock parody days after their Oscar incident.

Last weekend, the comedian hosted the 94th Academy Awards. During the show, Rock made a joke about Jada Pinkett Smith’s haircut and compared her to GI. Jane. The 57-year-old was seemingly unaware of the fact that the actress’s lack of hair is due to her having the disease alopecia.

In response to the joke, the actress’s husband Will took to the stage. He promptly struck Rock, before returning to his seat. Smith continued to shout expletives at the comedian once he sat down.

The incident quickly became one of the most-talked-about scandals in years. Several MMA commentators and fighters have given their takes on the situation. Now, two welterweight greats have decided to joke around about it.

Georges St-Pierre and Stephen Thompson are currently working on the set of Karate Combat. Both of the UFC staples are going to be advisors for the fourth season, and while on set they decided to have some fun.

In a video posted to social media by Karate Combat, ‘Wonderboy’ approached ‘Rush’ and asked if he’d seen the Oscars. He then decided to make a joke about St-Pierre’s hair, saying that if an award existed for worst style, he’d win. In response, the Canadian got out of his chair and slapped Thompson. The whole incident was clearly in good fun.

While Thompson and St-Pierre decided to joke around about the situation, others have not been as kind to Will Smith. He’s been criticized relentlessly by the MMA community for the incident. High-profile figures such as Joe Rogan ruthlessly roasted him for his fragility which caused him to act out and strike the comedian during the show.

What did you think about Stephen Thompson and Georges St-Pierre’s version of “The Slap”?