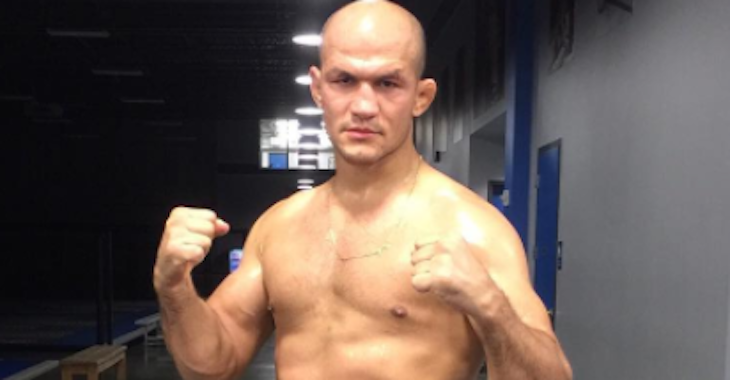 After a successful surgery mid-way through 2016, he began campaigning for a fight in the fall. When no fight materialized, he attempted to replace an injured Cain Velasquez against former champ Fabricio Werdum at December’s UFC 207. When this bout failed to come together, he accepted a fight with the much lower ranked Stefan Struve, which was expected to headline last weekend’s UFC Halifax card. Finally, when Struve pulled out of this fight with an injury, Dos Santos was pencilled in for a somewhat surprising heavyweight title shot against Stipe Miocic, who he beat back 2014.

On Monday’s edition of The MMA Hour, Dos Santos joined Ariel Helwani to discuss his upcoming title shot, and the hectic nature of the last few months. The theme of these recent months, he said, has been failed attempts to fight Fabricio Werdum, who has apprently shut down the idea three times.

“I’m very confused with all of this situation, because I thought he’d like to fight me, but I don’t know anymore,” Dos Santos said. “It’s hard to say.”

“Let me tell you what,” he continued. “In October, when I was ready to fight, the UFC offered [Werdum] this fight. Me and him. He said no. When Cain Velasquez pulled out of the fight at [UFC 207], they called me and said ‘Junior, are you able to fight against one of these guys. They’re pulling out, are you able to fight?’ I said, ‘who’s pulling out?’ They said ‘Cain Velasquez is out of the fight,’ and I said ‘Ok, I’m in.’ It was seven days – seven days from the fight – and I said yes. I was prepared to fight, and he said no. He asked for a lot of money, and then he said no and the fight didn’t happen. Then when Stefan Struve pulled out of the fight, they offered [a fight with me] to him again, and for the third time, he said no.”

Junior Dos Santos then commented on the fact that, while Werdum has apparently refused to meet him in the Octagon, he’s been busy attacking him on social media – even saying he would show up at his gym to beat him up.

“I cannot understand how he says so many bad things,” Dos Santos said of Werdum’s trash talk. “The worst thing is, after all of these crazy things, he said he would come to my gym and beat me up in the gym,” he continued, struggling to contain his laughter. “I said ‘what’s this guy thinking?’ He just denied  to make money against me in a real fight, in a professional fight, and now he wants to come here and fight for free? Come on! What’s happening with this guy?”

How do you think a Junior Dos Santos vs. Fabricio Werdum rematch would go? Sound off, PENN Nation!