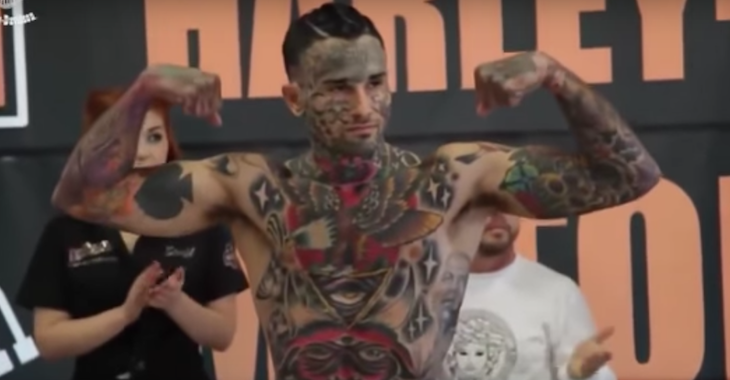 Yet another fighter has been involved in an ugly bout of domestic violence. This time around, the offending party is Australian bantamweight Julian “Julz the Jackal” Wallace.

According to a report from The Daily Telegraph, Wallace has plead guilty “one count of assault occasioning actual bodily harm and one count of intentionally choking with recklessness.”

These charges stem from an incident  in Australia on April 28 of this year, when Wallace attacked his former fiancee Jessy-Rose Clark, who goes by Jessy Jess and is also a fighter.

According to The Daily Telegraph’s report, Jess arrived home from work 15 minutes later than planned because she’d stopped to pick up dinner for Wallace. When the dinner Jess brought home wasn’t the one Wallace wanted, he began to yell, and shortly thereafter, started attacking her.

At this point, Jess says she attempted to tap out, because she thought she was going to lose consciousness. When Wallace didn’t relent, she managed to break free of his hold and, luckily, knock him out with a kick. It was at this point that she was able to contact the police.

Wallace, who has recently spent time training at Team Alpha Male in Sacramento, California, will receive his sentencing on December 7 in an Australian court.

This is not the first time the Australian fighter has found himself in the spotlight for the wrong reasons. In a video that’s been swirling around the internet for some time, Wallace can be seen unleashing some over-the-top taunts at his opponent Ben Nguyen, only to be knocked stiff when it came time to fight.

Wallace also became the center of social media frenzy earlier this year when his barbershop implemented a no-women policy.

What are your thoughts on this unfortunate development? Sound off, PENN nation!