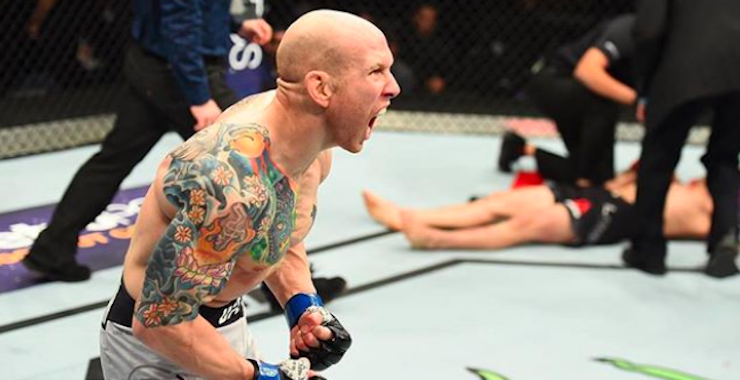 Josh Emmett has been wanting to capitalize off his fire built off of the startling knockout of top featherweight contender Ricardo Lamas. He classily offered a rematch to Lamas, but it looks like both parties are moving on. He put his sights on Brian Ortega, who had his own upset over Cub Swanson, but it looks like it all of that has fell through. While everyone wondered what was going to be the main event of UFC Orlando would be, at one point it was Emmett fighting Ortega. According to the man himself though, Ortega has refused the fight.

Breaking! Josh Emmett tells @bjpennradio that he was offered a fight with Brian Ortega to headline UFC on FOX in Orlando but unfortunately T-City declined the bout. Full story coming to @bjpenndotcom #UFCOrlando

“I definitely know he knows I’m a worthy opponent. His best friend is Jon Tuck, which I’ve fought and he’s a great guy. A good friend of his is Christos Giagos, that I fought as well before I got into the UFC. I don’t know, I think he just knows [it’s a risky fight]. It’s a risky fight for me too, every fight is. I want to be a champion, he wants to be a champion. I’ve said it before, you’ve got to beat the best to be the best. I just don’t get it. I literally just got the news like twenty to thirty minutes ago. I was driving home, so I’m just a little frustrated. For whatever reason, he doesn’t want to fight me, hopefully they can schedule it a little later down the line. I think that’s the fight that needs to happen.” — Josh Emmett speaking to our own BJ PENN Radio host Jason ‘Kinch’ Kindschy.

Brian Ortega is still undefeated and on a thirteen fight win streak. Knocking on the door to the next title shot after Frankie Edgar, it’s understandable to sit back and wait for that instead of fighting Josh Emmett. That probably doesn’t ease the frustration of the featherweight contender, who wants to get back in there as soon as possible and capitalize on the attention he’s garnered. Hopefully, they’ll be able to get this fight done later on down the road.