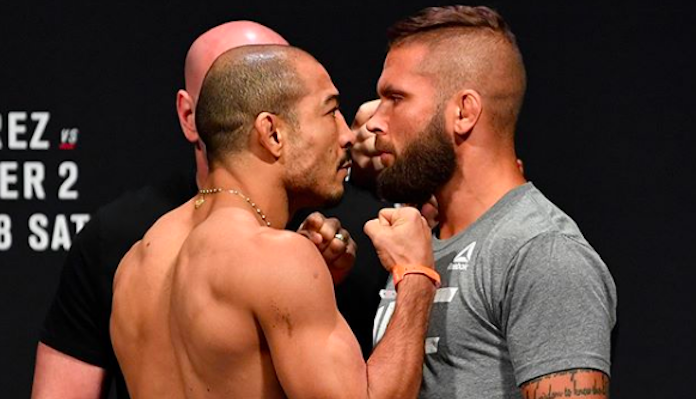 Jose Aldo entered tonight’s contest on the heels of a two-fight losing streak, with both of those losses coming via third-round TKO to current UFC featherweight champion Max Holloway.

Here’s how it went down:

Stephens presses forward, weapons at the ready. Aldo works the jab. Aldo uncorks a high kick, but misses. Stephens is looking to corner Aldo. He uncorks a high kick and misses. Stephens goes low with a kick. Aldo responds with one of his famous leg kicks. Stephens returns fire with an overhand, and a low kick. The American is favoring his leg kick. He goes to the body with a kick. Aldo lands a nice right hand, and a low kick shortly thereafter. Aldo whiffs on a right hand. Aldo lands an uppercut, and Stephens tries to take his head off. This man wants blood. Stephens traps Aldo against the cage, and swings like a mad man. Aldo’s head movement is on point, but he’s playing a dangerous game here. He’s in trouble. Aldo presses forward, pushing Stephens backward. Stephens misses on a telegraphed spinning back fist. Aldo is the aggressor now, pushing a bloody Stephens backward. Stephens attempts to regain control of the center, but Aldo floors him with a missile to the sternum. Stephens tumbles to the mat and Aldo swarms him with ground and pound. Stephens is hanging in there but the ref has seen enough, and peels Aldo off his bloody adversary.

What a win from the former featherweight champion Jose Aldo.

Result: Jose Aldo defeats Jeremy Stephens by TKO in round 1