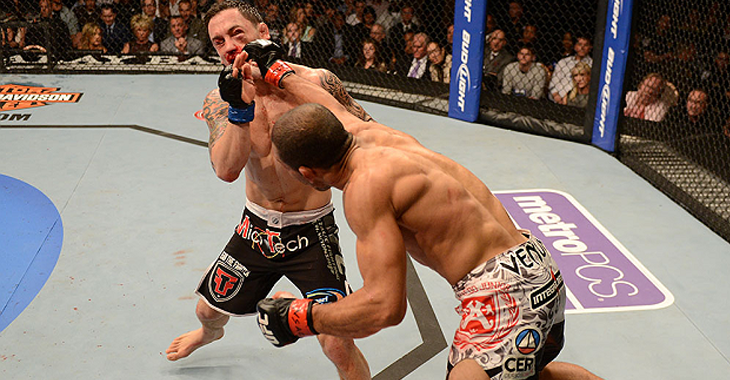 Aldo and Edgar fought back at UFC 156 in 2013 with Aldo taking a unanimous five round decision.

Now, with Aldo coming off the first knockout loss of his professional career against Conor McGregor at UFC 194 and Edgar coming off a knockout win over Chad Mendes, Edgar has momentum on his side, but Aldo is not worried.

“That hunger, everything I felt in the WEC days, is all back, and I want to do it again,” Aldo told MMAjunkie while at UFC 198.

Aldo says that if Edgar decides to trade punches in their fight, it will end badly for the former lightweight champion.

“(Wrestling is) his strongpoint,” Aldo said. “That’s his strength, and it’s what he’s going to try to do. There’s no way. If he stands with me, he’s going to go down.

“In my mind, I still haven’t lost the belt. Obviously, this is another step, and by beating Frankie Edgar I’ll get the belt back.”

Who are you picking to win the interim featherweight championship fight? Let us know who you are picking in by leaving a comment!