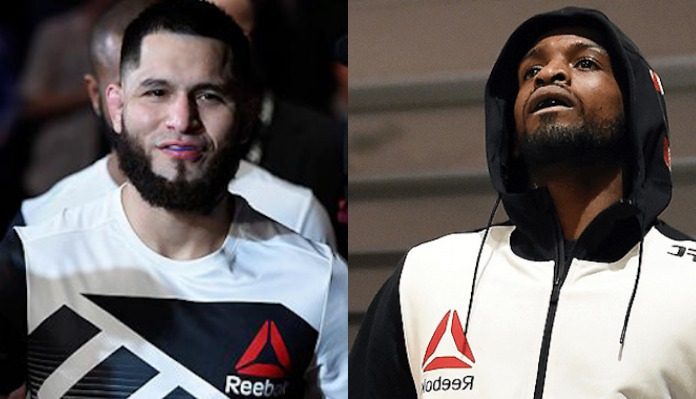 When Gunnar Nelson was forced out of his UFC Liverpool co-main event showdown with Neil Magny, sixth-ranked UFC welterweight Jorge Masvidal offered to step in and replace him. He only asked that this short-notice bout with Magny be contested at a 180-pound catchweight, as he wouldn’t be able to make the welterweight division’s 170-pound limit in time for the card. Regrettably, it seems as though this fight won’t be happening.

Masvidal gave his side of things on Monday’s edition of The MMA Hour.

“Magny has said no two times in the past, this one here will be a third time,” Masvidal said (transcribed by Adam Guillen Jr for MMAMania). “The other two times was at 170 pounds. So maybe he can say that he’s a professional and he stays ready, but he’s such a fucking square, saying that 180 was…whatever he just didn’t want to do it.”

“I know for a fact that the UFC wanted the fight and were very excited about the fight,” he added. “So now you know that there is a bitch in the building and his name is Magny.

“I’m not saying UFC accepted 180 [pounds], but when the offer came to them I know they were like, ‘Let’s do it, let’s try to make it happen.’ But this fucking coward said no.”

Shortly after Masvidal made these comments on The MMA Hour, Magny caught wind of them, and issued a scathing response on Twitter. He claims he didn’t turn down the fight, but that the UFC wasn’t actually interested in promoting a 180-pound catchweight bout.

I'll gladly fight him at any weight 170 up….truth is he's an unprofessional slob who is unable to make weight on 4weeks notice and the UFC said no. https://t.co/ClvgjcsmmM

“I’ll gladly fight him at any weight 170 up,” Magny said of Masvidal. “Truth is he’s an unprofessional slob who is unable to make weight on 4 weeks notice and the UFC said no.”

Whose side are you on in this Jorge Masvidal vs. Neil Magny beef? These two really need to settle their differences in the cage.