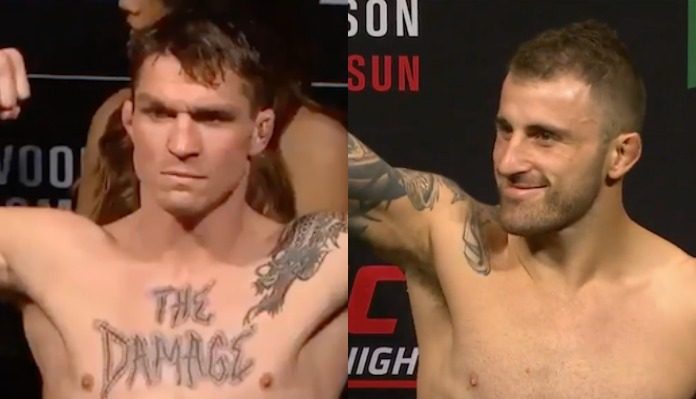 The UFC’s upcoming stop in Boise, Idaho, which is scheduled for July 14, keeps getting better. The latest bout to be tacked onto the bill is a dynamite featherweight matchup between all-heart Team Alpha Male star Darren Elkins and surging Australian prospect Alexander Volkanovski.

This bout was first reported by BJPenn.com’s Tom Taylor.

Hearing that a featherweight bout between Darren Elkins and Alexander Volkanovski is almost a done deal for #UFCBoise.

Elkins, who currently holds the number-10 spot in the UFC featherweight rankings, is on an impressive, 6-fight win-streak. This streak began with a trio of decisions over Robert Whiteford, Chas Skelly and Godofredo Pepey, and continued with a 2017 Comeback of the Year contender opposite Mirsad Bektic, a split win over Dennis Bermudez, and yet another insane comeback win over Michael Johnson, who he submitted in the second round. “The Damage” is 24-5 overall.

Volkanovski, meanwhile, has looked like a juggernaut since joining the UFC roster — and really, since his professional MMA career began. Currently an incredible 17-1 overall, the Australian has picked up dominant wins in his first four Octagon bouts, defeating Yusuke Kasuya, Mizuto Hirota, Shane Young, and most recently, the formerly undefeated Jeremy Kennedy. Volkanovski has been calling for a step up in competition for some time, and in Elkins, he has absolutely received it.

The UFC’s July stop in Boise will be topped by a heavyweight contender bout between former UFC heavyweight champion Junior Dos Santos and former World Series of Fighting heavyweight king Blagoy Ivanov. The card will also feature the return of three-time featherweight title challenger Chad Mendes, who emerges from a lengthy USADA suspension to battle Myles Jury, a lightweight bout between James Vick and Paul Felder, and many other interesting attractions.

Here’s the UFC Boise card as it now stands: