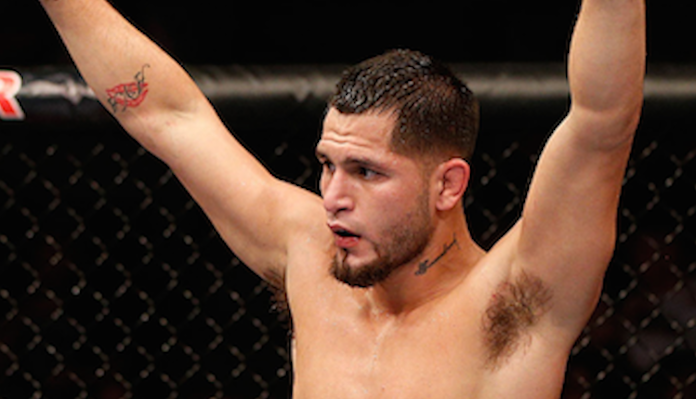 Late last week the UFC’s May 27 debut in Liverpool lost its compelling welterweight co-main event, as Iceland’s Gunnar Nelson was forced out of his fight with Neil Magny with an injury. The good news is that sixth-ranked UFC welterweight Jorge Masvidal is angling to step in and replace Nelson, provided Magny agrees to 180-pound catchweight bout.

Ariel Helwani was first to report Masvidal’s interest in this short-notice bout with Magny. Shortly thereafter, Masvidal spoke with BJPenn.com’s Jason Kindschy to update on this potential bout, and explain why he’s interested in stepping up.

Apparently, the UFC is already on-board with this short-notice Masvidal vs. Magny 180-pound catchweight bout. That said, Masvidal isn’t optimistic Magny will accept.

Just spoke to @GamebredFighter about stepping in against @NeilMagny at #UFCLiverpool and he tells me that the UFC is on board. Just need Magny to accept the catchweight. @FirstRoundMgmt @bjpenndotcom #TheFightersVoice

“My manager told me about [Nelson’s withdrawal,] and he was like ‘hey man, here’s your chance to smash Magny,’ cause he knows I don’t like Magny one bit,” Masvidal said. “So he offered it to me, and he was like ‘what do you think?’ We’ll make it at a catchweight, cause I’m a little heavier right now.”

“We offered it to the UFC at 180 [pounds] and they loved it,” Masvidal continued. “They thought we’d make a great addition to the card, so now they just have to run it by Magny. I’m almost positive the answer’s going to be no, because this situation has happened with him in the past, so I’d surprised if he took it.”

“I’m sure his excuse will be something like ‘oh I don’t want to take it at 180,'” Masvidal added. “But I don’t want to be unprofessional and say 170 when I can’t make it. But I can put on a great show at 180. So that’s why I couldn’t originally take the main event [fight with Darren Till].”

Masvidal then explained that there are only two fighters in the UFC that he’d be willing to step up and fight on short notice. One, of course, is Magny. The other is former UFC middleweight champion Michael Bisping.

“If it was somebody else, I probably wouldn’t have stepped up,” he said. “But there’s two guys that I don’t need a camp or nothing for, and that’s Bisping, Magny and pretty much that’s about it. Those guys, I’m there to fuck ’em up.”

Does a 180-pound catchweight between Jorge Masvidal and Neil Magny interest you?