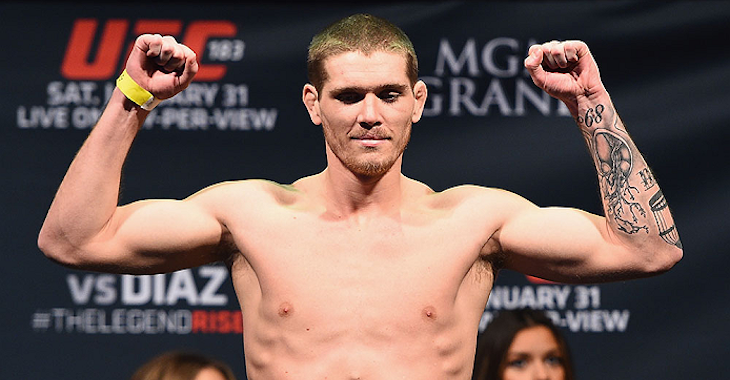 Back in September, it was announced that Canadian MMA veteran Jordan Mein (29-10) would be emerging from a short-lived retirement to make a UFC return. Today, the opponent for that return came to light.

The returning veteran will take on Norway’s Emil Meek (8-2-1) at UFC 206. The card will emanate from the Air Canada Centre in Toronto, Ontario, Canada on December 10.

The bout will be Mein’s first since a January 2015 TKO loss to Thiago Alves. Prior to that loss, he was riding high with two straight wins over Hernani Perpetuo and and Mike Pyle. Over the course of his UFC career, which began in early 2013, Mein amassed a 3-2 record. Despite being just 27 years old, the returning Canadian has fought almost 40 times as a professional.

Meek, meanwhile, will be making his UFC debut. Originally, he was expected to make that debut opposite Jessin Ayari at UFC Fight Night 93 on September 3, but that plan was nixed when he was notified that some of the medical treatment he’d received prior to signing with the UFC was “potentially out of compliance with UFC’s Anti-Doping Policy.” With that issue squared away, Meek will now make his UFC debut against a much more well-known opponent in Mein.

The Norwegian fighter is best known for his blistering, 45-second knockout of former UFC contender and World Series of Fighting Champion Rousimar Palhares back in May – the win that earned him his UFC contract. He has never seen the judges’ scorecards as a professional, having won seven of his fights by knockout and one by submission, and experienced both of his losses via TKO. Though it was long rumored that returning welterweight great Georges St-Pierre would headline UFC 206, the card will instead be headlined by a rematch between light heavyweight champion Daniel Cormier and number-one-contender Anthony “Rumble” Johnson.

Other major features of the UFC 206 lineup include a featherweight showdown between dangerous veteran Cub Swanson and rising South Korean Doo Ho Choi, a lightweight scrap between John Makdessi and Lando Vannata, and a clash between light heavyweight prospects Nikita Krylov and Misha Cirkunov.

Who do you think wins this clash between Mein and Meek? Sound off, PENN nation!