Jon Jones applauds Glover Teixeira for being the only fighter to have kept “kicking ass” after fighting him: “I’ve always found this interesting”

Jon Jones has applauded Glover Teixeira as being his only opponent to continue thriving after fighting him.

While he may not be ‘undefeated’ in the traditional sense as a result of a DQ loss and a no contest, Jon Jones is considered by many to be one of the greatest fighters of all-time – and the only one of the modern era, alongside Khabib Nurmagomedov, who has technically never lost a fight.

Jones has been up against some of the very best in the light heavyweight division and always seems to find a way to win. Along the way he’s knocked off some great names and after they go head to head with ‘Bones’, more often than not, they’re rarely ever the same.

In a series of since-deleted tweets, Jones took note of that – and also took the time to praise former foe Glover Teixeira. 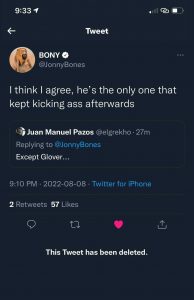 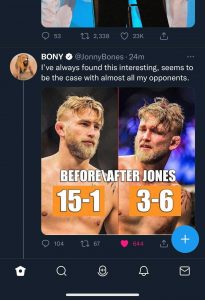 Jones referenced a statistic that highlights Alexander Gustafsson’s record of 15-1 before he fought the GOAT, and 3-6 after, with his latest loss coming at UFC London just a matter of weeks ago.

In addition to that, he drew attention to Glover Teixeira who kept on plugging away until he finally beat Jan Blachowicz to become the UFC light heavyweight champion.

In terms of Jon’s future, it’s still up in the air as to when he’s actually going to return to the Octagon. When he does, he’ll be leaving his light heavyweight past behind in search of pastures new at heavyweight, a switch he’s been planning to make for a long time.

Why do you think Jon Jones’ opponents struggle after losing to him? Can you see a scenario in which Glover Teixeira becomes a two-time champion? If he does, will he get an immediate rematch against Jiri Prochazka or be forced to wait? Let us know your thoughts!