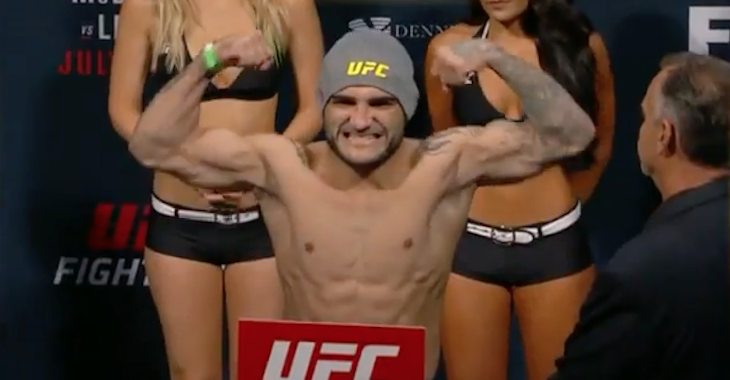 One of the three men to miss weight was UFC bantamweight John Lineker, who will be fighting in the main event of the card against John Dodson. Lineker, who sits at #3 on the UFC’s official bantamweight rankings, now holds the record for the most times missing weight in the history of the UFC. Interestingly enough, Lineker’s manager, Alex Davis, says Lineker made weight days ago, but a “stupid error” caused him to gain it back, and ultimately miss weight.

“What’s been happening is he’s been coming and making weight two or three days before, which happened this time,” said Davis, who’s worked with Lineker since his UFC debut in 2012. “So he’s measuring himself on his scale, he saw he was underweight, and he started consuming not to drop weight too much.”

“He would have made it, we just ran out of time,” Davis said. “If we had another hour, he would have done it.”

“All the Brazilians had a very hard time making weight because it’s a long flight,” Davis said. “It’s nine hours to Miami, and another seven hours here. So what happens is you dehydrate during the flight. It’s not an excuse. It’s just a problem that exists and we need to handle it.”

Despite missing weight, Lineker will fight in the main event against John Dodson, who will be given 20% of Lineker’s purse for the event. Lineker will be riding a 5-fight win streak into his bout with Dodson, part of his win streak includes a 3-0 stint at bantamweight after being forced to move up in weight by UFC President Dana White after missing weight at flyweight several times.