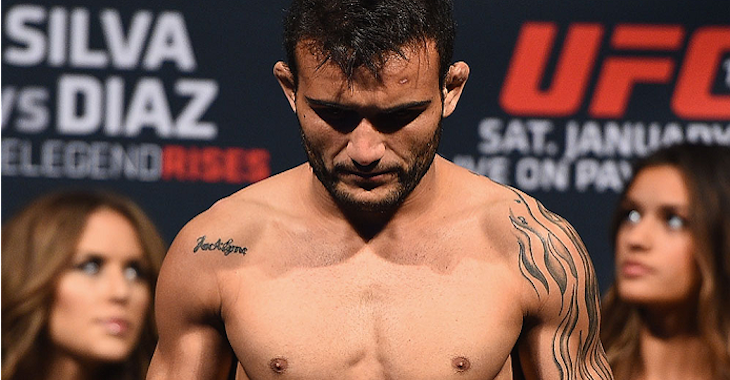 Leading up to the suspenseful weigh-ins approaching quickly on Friday, we already had a roller coaster of emotions kicking into UFC 219 fight week just after Christmas. Jimmie Rivera has been going back-and-forth with Marlon Moraes about being his replacement this Saturday, but despite multiple attempts to agree on increasingly higher catchweights, it never worked out. It all started when his former opponent John Lineker had to pull out of their fight with a serious tooth infection. Speaking recently to Guilherme Cruz of MMA Fighting, Lineker opened up about the situation.

“I noticed this when I came to Las Vegas earlier. I didn’t know how bad it was a week ago. I started to feel the pain, but I thought it was something related to the root canal treatment I did three weeks ago. When I talked to a second doctor — the first one didn’t have an answer for the pain — they found this infection. I kept training hard despite the pain, but the pain kept getting worse a week before fight week. I decided to go to Vegas early so the UFC doctor could see how I was because I wanted to fight no matter what, but he saw that I wasn’t fit to fight and would have to do something about it.”

I would like to apologize to @JimmieRivera135. I know how much it sucks when this happens. I want to apologize to @seanshelby and the @ufc @ufc_brasil . I begged them for the fight, and they agreed, and now I feel horrible to have to withdraw. And I need to apologize to the fans

“I’ve already apologized to [Jimmie] Rivera, the UFC, Dana [White], Sean [Shelby] and every fan that was waiting for this fight. I will get back to my 100 percent and come back as quick as possible to fight — and who knows, maybe it’s against him. I wasn’t in the mood of staying [in Las Vegas]. With the medication I’m taking, I can handle the pain. I want to come back as soon as possible. My wife has taken care of everything already. I will have the procedure as soon as I get [to Paranagua]. I want to get better and get back to training and fighting as soon as possible.” — John Lineker speaking to MMA Fighting.

It happens man, hope you have a speedy recovery

John Lineker said that he will undergo surgery on Thursday morning and can tentatively be cleared to train in just 15 days. Everyone knows  Lineker always brings it when he fights, so any match-up that gets made after he recovers is going to be a blast. Hopefully, he’ll be able to be re-booked with Jimmie Rivera since it looks like he will not be fighting at UFC 219 after all. Although, he has since called out champion TJ Dillashaw and former champ Cody Garbrandt.