Renowned MMA coach John Kavanagh, who is the man behind stars like Conor McGregor, Gunnar Nelson, James Gallagher and Dillon Danis, has a bone to pick with the UFC.

The Irish coach is currently in Las Vegas to corner his SBG Ireland fighters Richie Smullen and Brad Katona, the latter of whom is a finalist on the latest season of The Ultimate Fighter. Both fight at the Ultimate Fighter 27 Finale this Friday.

Unfortunately, Kavanagh seems to have been stiffed by the UFC, who bailed on their commitment to pick him up from the airport. This, after Kavanagh covered his own flight and hotel for his trip across the pond.

Kavanagh went off on the promotion in a Tweet on Monday — which he promptly deleted. See it below (screen-shot via MMAMania). 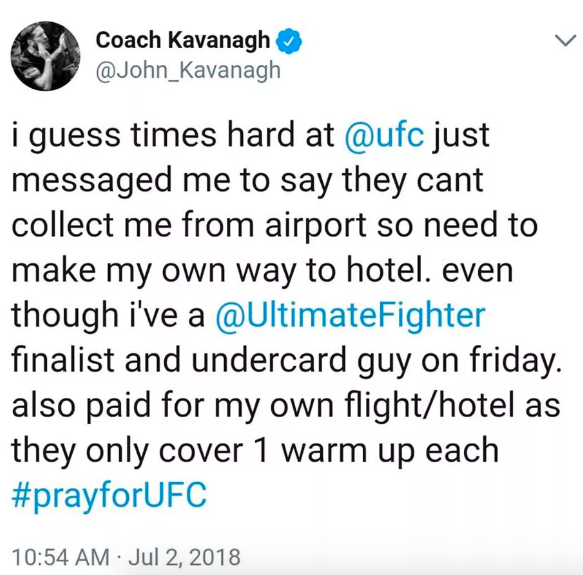 “I guess times hard at [UFC],” Kavanagh said in his Tweet (edited for clarity). “[They] just messaged me to say they cant collect me from airport so need to make my own way to hotel. Even though I’ve an [Ultimate Fighter] finalist and undercard guy on Friday. Also paid for my own flight/hotel as they only cover 1 warm up each #prayforUFC.”

Given that Kavanagh deleted this Tweet, it’s possible that the UFC acted quickly and corrected their mistake. Then again, its also possible this is the latest act of stinginess from the organization that reportedly banked $700 million in 2017.

What do you think of this tension between Coach John Kavanagh and the UFC? Join the conversation in the comments section below.