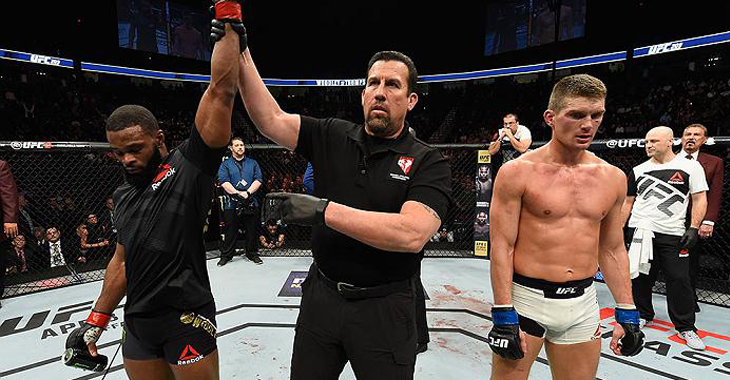 Earlier today UFC welterweight champion Tyron Woodley told ESPN’s Brett Okamoto that he was targeting a summer return and would likely be fighting former lightweight title challenger Nate Diaz in his next bout.

“The Chosen One” has not competed since August’s UFC 214 event where he successfully defended his title against submission specialist Demian Maia.

Shortly after his conversation with ESPN, Woodley sat down with BJPENN.com’s Chris Taylor where he spoke about a number of different topics including the potential scrap with Nate Diaz.

“I think there is a strong possibility that Nate Diaz could be my next opponent. The UFC tried to put that fight together before (UFC 219) and they just weren’t able to come to terms with Diaz. But Nate was definitely interested. The UFC already knows I will accept the bout, so they just have to make a deal with him. They don’t have to ask me.”

Woodley, who has defended his title against top contenders Demian Maia and Stephen Thompson over the course of his last three octagon appearances, believes the time is right for a marquee match-up with Diaz.

“Right now Diaz is the biggest draw. That is the direction the UFC has been heading, making the biggest fights possible and as of right now, aside from Georges St-Pierre or Conor (McGregor), Nate is the biggest possible fight.”

Taylor asked Woodley which fighter he considered to be the welterweight divisions current top contender.

“You know what, Stephen Thompson is like the Jon Fitch of today.” stated Woodley.

Jon Fitch spent most of his fighting prime in the shadow of welterweight kingpin Georges St-Pierre. Fitch went an incredible 13-1 under the UFC banner from October 2005 until August of 2010, losing to only the aforementioned “GSP” in that time.

According to Woodley, “Wonderboy” is the welterweight divisions second best fighter, which ultimately leaves him in the same position as Fitch.

“I honestly believe Thompson would beat all of those other guys,” said Woodley. “Lawler, Maia, ‘RDA’, any of them. Thompson is just on a different level. He has good takedown defense, he has amazing striking and obviously one hell of a chin seeing as he took my best punch. He is also very hard to prepare for. He’s just a great fighter.”

Thompson has gone 9-2-1 since joining the UFC ranks in February of 2012. The impressive karate striker has scored five knockout victories during his time with the promotion. “Wonderboy” has squared off with Woodley on two occasions, battling Tyron to a draw at UFC 205 before suffering a majority decision loss in their rematch at UFC 209.