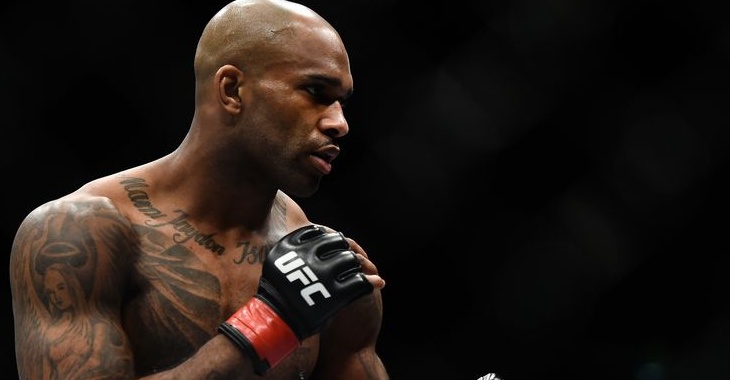 This Saturday, in the co-main event of UFC 220, Daniel Cormier and Volkan Oezdemir will collide for the UFC light heavyweight title. All of the light heavyweight division’s top contenders will be watching on intently, eager to know which man they’ll be gunning for come Sunday morning. That includes British knockout artist Jimi Manuwa.

Manuwa gave his take on this fight in a recent interview with MMA Fighting.

“It’s an interesting fight, but on paper DC should win the fight all day long,” Manuwa said. “At the same time, on paper I should have won my fight against Volkan all day long as well.

“Volkan could shock the world. I wouldn’t put it passed him. At light heavyweight, it only takes one good shot, as we all know. It will be interesting, but I think DC will grind him out and possibly get the win by the third round. I think he should win it by the third, but it’s fighting and it’s hard to predict these things.”

“Again, DC should win, but you can’t rule Volkan out because he’s a hard-hitter. He could shock the world. It’s very interesting.”

Manuwa then explained that, while the odds favor Cormier, Oezdemir definitely has advantages in this fight.

“I think he has a lot less pressure going in because he’s come out of nowhere,” Manuwa said. “Being the underdog he doesn’t have to worry about anything else but getting in there and fighting. I think that’s a bonus for him.”

Whatever the case, Manuwa is hoping he’ll have the chance to avenge his recent knockout loss to Oezdemir in the future.

“I think it could happen quite soon depending on what happens with him and DC. That rematch could happen this summer. After my fight in London, I’m going to stay ready. Hopefully he’s injury free and he’ll be ready soon.

“If he doesn’t lose, it could take a little longer, but I definitely want that rematch with him.”

What do you think of Jimi Manuwa’s assessment of the UFC 220 co-main event?