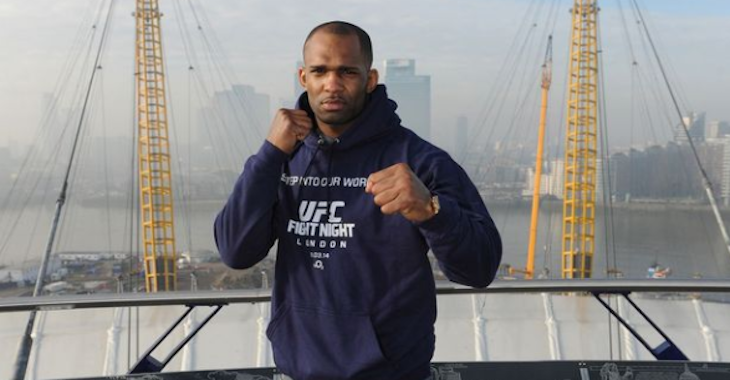 Back in July, on the main card of the stacked UFC 214, English knockout artist Jimi Manuwa stepped into the Octagon with Swiss striker Volkan Oezdemir in a perceived light heavyweight number one contender fight. Unfortunately for Manuwa and his fans, this one went to Oezdemir, who won with punches in the first round.

From there, Manuwa set his sights on the opportunity to rebound, while Oezdemir was pencilled in for a UFC 220 title fight with light heavyweight champion Daniel Cormier.

Speaking on the latest episode of BJ Penn Radio, Jimi Manuwa opened up on his loss to Volkan Oezdemir and assessed the challenger’s chances against the champ Daniel Cormier.

“Listen, it was a clean shot. When you’re a powerful light-heavyweight, yeah, it doesn’t take that much.” Manuwa said of the Oezdemir punch that rocked him. “If you’re hitting someone with them UFC 4. oz gloves, and you’re not knocking them out, there’s something wrong with your power, you know?”

“Anyone can get knocked out with them gloves, even with a jab,” he continued. “Look at my fight in London with Corey Anderson. I jabbed him and he dropped to one knee and that, so I knock people out with jabs and that, you know?”

Manuwa then shed a bit of light on Oezdemir’s matchup with Cormier, and how sees it going.

“All it takes is one clean shot in there, you know, for me anyway. And Volkan, Volkan’s a powerful dude as well, he’s a K1 striker, he knows how to strike as well. So all it takes is one,” he said of Volkan’s chances. “DC’s a tough guy, he’s a great champion and that, and I don’t know. I think DC should take the victory, but you know, Volkan’s continued to surprise people and everything, so you know, he’s a dangerous guy.”

What do you think of Jimi Manuwa’s comments on Volkan Oezdemir?