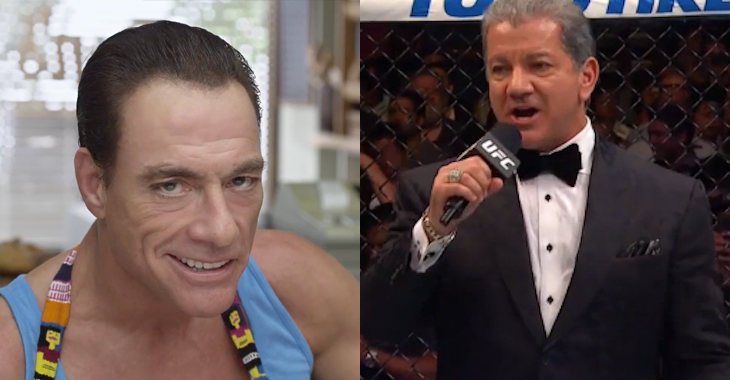 How many 56-year-olds and 60-year olds do you see at the gym that are looking in better physical shape than many half their age?

Van Damme is obviously no stranger to fitness. His physique, flexibility, and martial arts background is what helped propel him to be a big star in action movies. 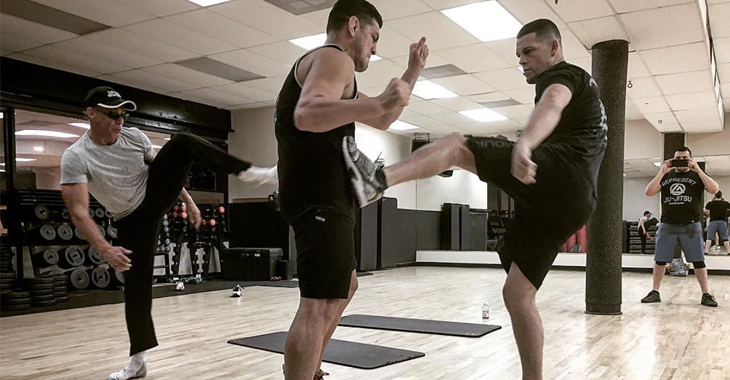 Nick and Nate Diaz were huge fans of Van Damme growing up and still have admiration for the movie star. We have seen the Diaz brothers somewhat recently hanging out with their childhood hero and have even seen Van Damme showing the MMA stars some of his kicking techniques.

At 60-years-old, Bruce Buffer is living up to his name. Although not wearing a tank top and showing off his arms like Van Damme in the photo below, you can see that the Octagon announcer has a buff and in shape physique. Most commonly seen in the Octagon with one of his fancy suits introducing the fighters standing across from each other, Buffer makes sure to pour every ounce of energy and passion into his delivery.

Buffer posted a photo on social media with Van Damme at the gym and said the following in his caption:

Great seeing my friend @JCVD in Gold’s Gym today looking happy & fit as always… He will be back on my #ITSTIME® Podcast in next few weeks to let us know all going on & more! 👊 #UFC #BUFFLIFE 😎

Great seeing my friend @JCVD in Gold’s Gym today looking happy & fit as always… He will be back on my #ITSTIME® Podcast in next few weeks to let us know all going on & more! 👊 #UFC #BUFFLIFE 😎

Think you can be in as good shape when you are in your 50s and 60s?