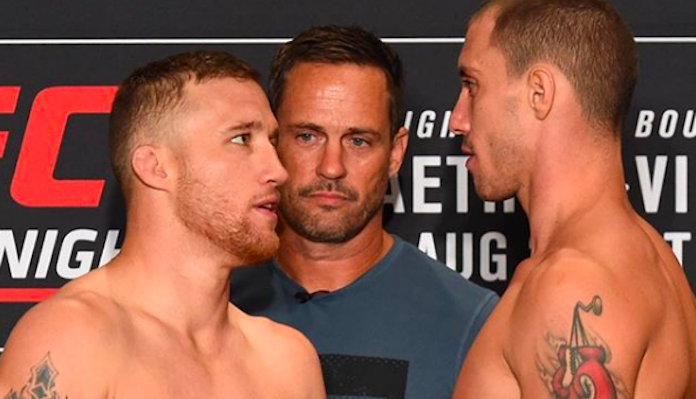 Last night, in the main event of UFC Lincoln, James Vick and Justin Gaethje stepped into the cage together to back up months of pre-fight trash talking. In the end, it was Gaethje who did so, putting Vick down with a massive punch in the first round.

This loss, unsurprisingly, was a tough one for James Vick. Not only because of all of the pre-fight trash talk, because it ended his impressive win-streak and temporarily derailed his hopes of breaking into the lightweight top-5.

James Vick discussed the loss — and offered Justin Gaethje his respect — in a classy post-fight statement on Instagram.

See what he had to say below.

“Worst night of my life last night,” Vick said. “Thank you [Justin Gaethje] for the opportunity. Tho confident in myself I did always respect you. I said what I said to get and promote the fight. You are a class act and I do appreciate your kind words last night. I have no excuses. I was in shape, healthy and confident. I blew it. For all those that believed in me and support me I am truly sorry. I will go back and keep training and loving this life of being a fighter and a martial artist. This is the life I have chose and I guess this comes with the territory. Thanks to all my friends, family and teammates for the support and thank you [UFC] for the opportunity.”

Prior to his UFC Lincoln loss to Justin Gaethje, James Vick was on a four fight win-streak. This streak was composed of a decision defeat of Francisco Trinaldo, a TKO of Joseph Duffy, a TKO of Polo Reyes, and a submission of Abel Trujillo. The 31-year-old Texan is now 13-2 overall.

What do you think the future holds for James Vick after UFC Lincoln?