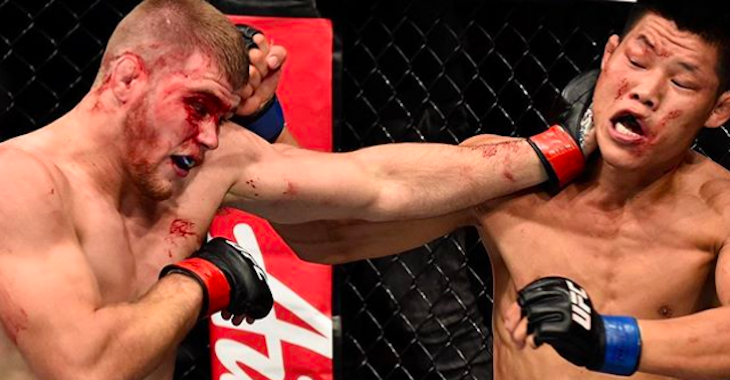 One of the highlights of the UFC 221 main card was a welterweight war between Australia’s Jake Matthews and China’s Li Jingliang. This wild battle, which Matthews won by decision, dazzled onlookers and earned both fighters $50,000 Fight of the Night bonuses.

Regrettably, this fight was also draped in controversy. Mid-way through the contest, Matthews locked up a guillotine choke that seemed to be quite deep. In a ditch effort to escape this choke, Li appeared to purposefully claw out at at Matthews’ eyes, gouging and poking in an immediately controversial display.

While this move from Li caused a tidal wave of backlash, Matthews himself was incredibly forgiving.

Shortly after he was announced as the bout’s winner, Matthews hoisted his battered Chinese foe up in a display of sportsmanship. He then assured Octagon commentator Jon Anik that he did not fault Li for his actions.

Post-fight, in an interview with Megan Olivi, Matthews reiterated that he’s holding no grudges, and that he wishes Li all the best going forward.

“Everything’s fine,” he said (h/t MMAJunkie.com). “[The damage is] more superficial than anything. It’s not too deep. No hard feelings against him. It’s what happens in fights, and all the best for his next fight, and I hope he does well.”

Matthews also updated on the condition of his eye in a post-fight statement on Instagram. Though his eyelid looks a little rough in the photo provided, he assured it was merely “sore.”

Thanks for all the messages and well wishes everyone. @ufc fans are the best in the world! Pulled up alright, sore eye but oh well 🙂 #ufc #mma #martialarts #fight #australia #jj #instagood #instafight #instamood #me #happy #training #hardtokill #photooftheday #bestofthebest #bestoftheday #follow #followme

“Thanks for all the messages and well wishes everyone,” Matthews said in his post. “UFC fans are the best in the world!
Pulled up alright. Sore eye, but oh well.”

Clearly, Jake Matthews is as classy and sportsmanlike as he is talented.