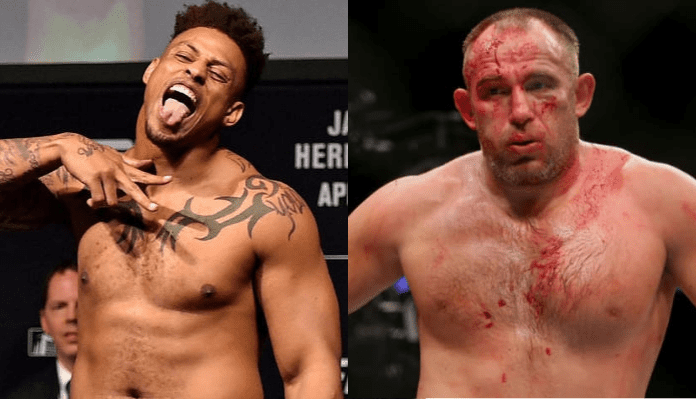 According to MMA Junkie, Greg Hardy Jr. will look to bounce back from his loss against Tai Tuivasa when he takes on Aleksei Oleinik at UFC 270. The event will be the UFC’s first Pay-Per-View of 2022 and is set to take place on January 22nd.

After breaking the news about the fight on Monday, the publication said,

“MMA Junkie verified the matchup with multiple people close to the situation. The people requested anonymity because the UFC has yet to make an official announcement.”

The bout will be a big test for Hardy who’s now riding a two-fight losing streak for the first time in his MMA career. Having suffered a second round TKO loss to Marcin Tybura at UFC Fight Night 183 in December 2020, ‘The Prince of War’ was knocked out by Tuivasa at UFC 264 in July.

#BREAKING: Greg Hardy will attempt to overcome a 63-fight deficit in MMA experience when he takes on Aleksei Oleinik in January.

It’s fair to say that Oleinik will be the most experienced opponent that Hardy has ever stood across from. Having begun his professional career way back in 1996, Oleinik boasts a record of 59-16-1 – which means he’s fought 63 more times than the American.

In contrast, Hardy only made the transition from American football in 2018. That being said, Oleinik is currently on a three fight skid. ‘Oleinik’ suffered TKO losses to Derrick Lewis and Chris Daukaus before conceding a unanimous decision to Sergey Spivak at UFC on ESPN 25 in June.

Oleinik’s last victory came back in 2020 when he beat former champion Fabricio Werdum via split decision at UFC 249. The 44 year old, who is famous for his Ezekiel choke, has achieved a remarkable 78% of his 59 wins with a submission. Given that Hardy has never been submitted, it stands to be an intriguing match-up.

Meanwhile as it stands, UFC 270 is without a main event or a venue. However, MMA Junkie have also reported that in addition to Hardy vs Oleinik – a second rumoured fight on the card which encompasses a middleweight title eliminator between Derrick Brunson and Jarod Cannonier.

Are you excited about these two rumoured match-ups?