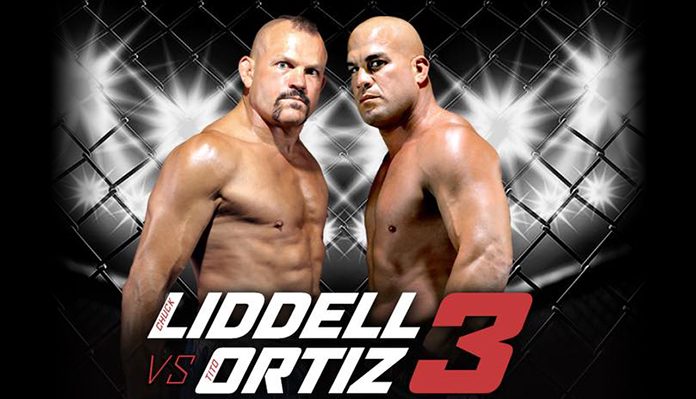 Golden Boy MMA will hold its inaugural event “Chuck Liddell vs. Tito Ortiz 3” tonight at The Forum in Inglewood, California.

In the main event of the evening former UFC light heavyweight champions and bitter rivals Chuck Liddell and Tito Ortiz will throw down for a third time.

“The Iceman” and “The Huntington Beach Bad Boy” have met twice in the past, with Chuck Liddell emerging victorious by way of knockout in both occasions.

Despite his previous success, Chuck Liddell will be the betting underdog for tonight’s trilogy bout with Tito Ortiz.

Tito Ortiz has been the much more active fighter as of late, having last competed in January of 2017 submitting Chael Sonnen at Bellator 170.

“The Huntington Beach Bad Boy” has won three of his past four fights overall and will enter tonight’s fight sporting a record of 19-12-1 in MMA.

Meanwhile, Chuck Liddell has not tasted victory since defeating Wanderlei Silva at UFC 79 in December of 2007.

“The Iceman” enters tonight’s main event on a losing skid, his latest being a first-round knockout loss to former middleweight champion Rich Franklin at UFC 115.

In the co-main event of the evening, former UFC veteran “Filthy” Tom Lawlor will square off with Deron Winn.

Get the full Chuck Liddell vs. Tito Ortiz 3 Fight Card, Start Times and Live Results below.

Chuck Liddell vs. Tito Ortiz – Ortiz def. Liddell via KO (punch) at 4:24 of Round 1
Tom Lawlor vs. Deron Winn – Winn def. Lawlor via unanimous decision (30-27 x3)
Efrain Escudero vs. Gleison Tibau – Tibau def. Escudero via unanimous decision (29-28 x3)
Ricky Palacios vs. Walel Watson – Palacios def. Watson via KO (punches) at 3:56 of Round 1
James Barnes vs. Alberto Morales- Barnes def. Morales via submission (armbar) at 4:09 of Round 3
Oscar Cota vs. Jay Silva – Silva def. Cota via submission (head and arm choke) at 2:13 in Round 3

Who do you think will prove victorious in tonight’s highly anticipated trilogy fight between MMA legends Chuck Liddell and Tito Ortiz? Sound off in the comments section PENN Nation!