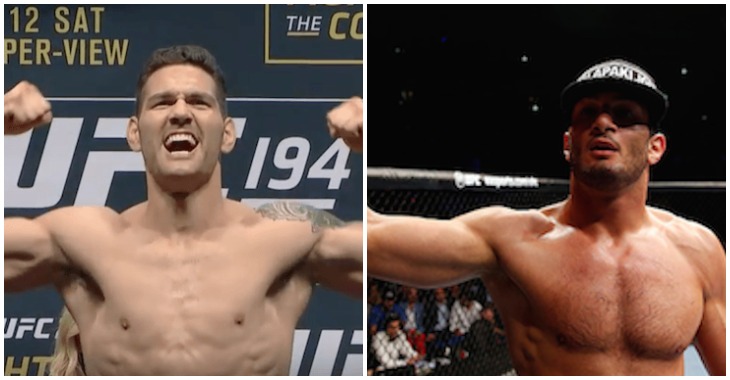 When Gegard Mousasi avenged his previous loss to Uriah Hall in November, he set his sights on the middleweight division’s top-5, where he hoped to find an opponent who could propel him the rest of the way to a title shot. Now, it appears as though his crosshairs have landed on Chris Weidman, who is currently on a tough, two-fight skid after an admirable reign as UFC middleweight champion.

“[The UFC] offered you the fight days ago, [Chris Weidman],” Mousasi said to Weidman on Twitter. “Suddenly you have disappeared. Accept the fight already. I am waiting, pal. #Don’tBeScared.”

@ufc offered u the fight days ago, @ChrisWeidmanUFC . Suddenly u have disappeared. Accept the fight already. I am waiting,Pal.#DontBeScared

This Twitter callout from Mousasi quickly prompted a response from the former middleweight champ.

“Easy, pal,” Weidman replied to Mousasi. “You were just one of the names give by [the UFC], and I’m still healing up. Glad you’re finally speaking, though!”

Easy, Pal. You were just one of a few names given by @UFC, and I'm still healing up. Glad you're finally speaking, though! https://t.co/TVPH6KWWfi

This response from Weidman then prompted another related Tweet from Mousasi, in which he issued an open challenge to any prospective opponent who could help him get closer to middleweight gold.

“I am working to get the belt,” he said. “If the top guys won’t accept I am prepared to take volunteers.”

I am working to get the belt. If the top guys won't accept I am prepared to take volunteers. @ufc @arielhelwani

With his November defeat of Hall, Mousasi extended his current streak to four, having also recently defeated Vitor Belfort, Thiago Santos and Thales Leites. He now boasts an overall record of 41-6-1.

Weidman, meanwhile, has lost both of his last two bouts, having recently been knocked out by a Yoel Romero flying knee and TKO’d by Luke Rockhold. His loss to Rockhold marked the end of his title reign, which saw him defend the middleweight throne against Anderson Silva, Lyoto Machida and Vitor Belfort.

Who do you think comes out on top in a Chris Weidman vs. Gegard Mousasi bout. Is this a fight you’re interested in seeing? Sound off, PENN Nation!