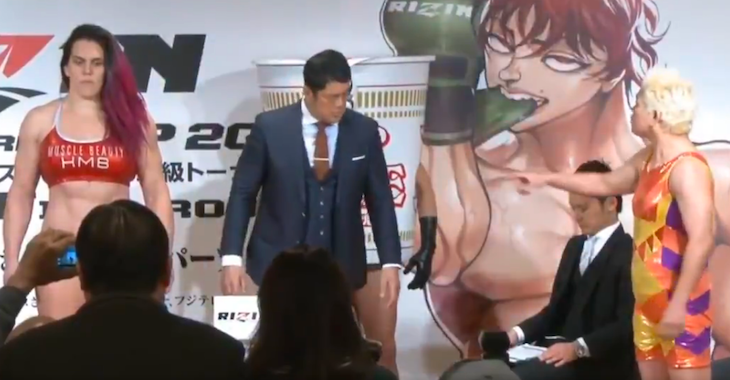 If things had gone according to plan, Brazilian grappling star Gabi Garcia would have returned to the Rizin FF ring on December 29, when she was scheduled to battle 53-year-old pro-wrestling veteran Shinobu Kandori.

While this fight was labelled by many as a “freak show,” it marked Garcia’s opportunity to end a tough year on a high note, erasing memories of two 2017 no-contests. Unfortunately, Garcia’s fight with Kandori never occurred, as health problems led her to miss weight by a whopping 26 pounds.

I had some personal problems with my family. My father was sick, and my grandfather and my uncle were sick as well. I was taking dancing classes with Cris (Cyborg) and went to physical therapy, because of my knee, and my physical therapist checked my blood pressure. She asked me if it was normal of my blood pressure to go up and down like that, and it was not. I also had problems with some people in the Rizin staff, in terms of communication, some things I didn’t agree with, and that was hurting me inside.

I was breathing heavily, my heartbeat wasn’t normal, but it wasn’t really affecting my daily life. I left California to Japan 17 pounds over the limit, but I’m used to this weight cut. I made weight four pounds under (in 2016). I wouldn’t say I don’t suffer making weight, but I have a strong mind. But when I got to Japan, I worked out that night and my nose started to bleed a lot. I texted my manager George (Prajin) and he told me to let Rizin know of the situation, but I said I was alright.

I woke up the next morning and trained, and again my nose started to bleed. I was stressed because my team wasn’t there with me. Three visas were denied, other coaches were with Cris (Cyborg at UFC 219), and I only had one coach with me in Japan. My head wasn’t that confident anymore. I was too stressed.

I was 18 pounds over, but my coach told me to start cutting weight in the morning of weigh-in day. When I woke up at 6 a.m., I couldn’t move my hands, my vision was blurry. I entered the bathtub, and I couldn’t see anything anymore. I said, “I can’t do it, I can’t. I’m going to die in here.” When I left the bathtub, it was full of blood from my nose, and I freaked out a little bit.

I’m 32 years old, and the only time my period changed was when I took a birth control pill because of ovary issues, but this was the first time it came earlier. I couldn’t control my body.

I went to talk to my boss (Nobuyuki Sakakibara) and told him I wouldn’t cut weight anymore. I went to the weigh-ins, they saw I was overweight, and I couldn’t even stand. I laid down on the floor next to the scale. Kandori knew about it, and I was going to lose 30 percent of my purse. They offered me to fight her on Dec. 31, and I said yes, I said I’d get better. I wouldn’t give up because I knew it was an important fight for TV there. I was dehydrated, feeling ill. [Kandori] freaked out at the ceremonial weigh-ins, and my blood pressure went high again. She knew what was going on and had accepted to fight on Dec. 31 if I made weight, but then she said I had to make weight right before the fight, and I’d die in the ring if I did that. That’s the first time I felt my machine fail after all these years competing. It was my fault.

Needless to say, 2017 was not an easy year for the dangerous Gabi Garcia. Who do you want to see her fight in 2018?