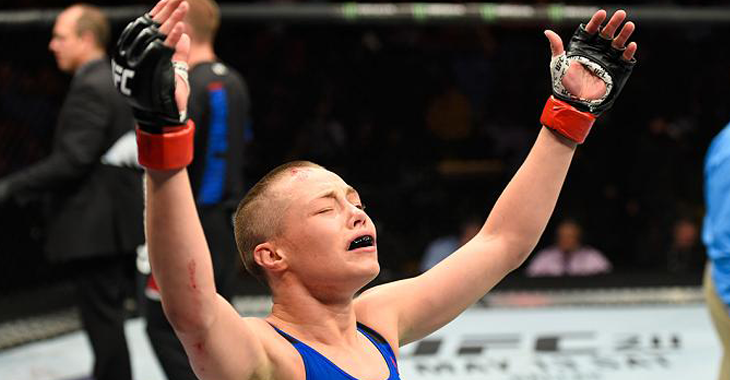 Thug Rose. Thug Rose. Thug Rose. Daniel Cormier hollered over and over again as Joe Rogan and Jon Anik freaked out. As we all freaked out. Stoic and immovable Rose Namajunas, her golden locks iconically clean shaven, upset Joanna Jedrzejczyk at UFC 217 to become the new women’s UFC strawweight champion. She was a huge underdog and there were already whispers of  ‘GOAT’ when using Jedrzejczyk’s name in a sentence. Namajunas put that all to rest with one fade left hook. It’s this performance that clinched ESPN to award her with their ‘Fighter of the Year’ award. She reflected back on the historic moment with ESPN’s own Brett Okamoto.

“I felt like I was part of the Knicks basketball team [before the fight with Joanna Jedrzejczyk]. I was in that really nice locker room and I felt so light on my feet, so agile — just great. Superhuman at that moment. [Saying the Lord’s Prayer] was a habit for me growing up. When I was helpless and didn’t know what to do — that was something I said to make me feel better. Now it’s way more intentional.”

Look back at Jedrzejczyk vs Namajunas with this clip from FOCUS #UFC217. Then watch the entire episode here: https://t.co/cmP3GYhXUG pic.twitter.com/fjjfuCTrc0

“There’s way more belief and faith in [that prayer now]. There have been moments in my life that chaos surrounded me and I kind of fell victim to it. You can become attached to chaos. I was using that negativity as energy, rather than now putting those negative situations behind me and turning my experiences into a positive. I want to inspire people that you don’t have to fight with hate. You can fight with passion and desire to make this world a better place.” — Rose Namajunas speaking to ESPN’s Brett Okamoto.

In her prime and with her career’s biggest accomplishment behind her, all eyes will be on Rose Namajunas in 2018. Holding on to titles in the UFC is a very daunting and an extremely difficult task. The card which is now Namajunas’ claim to breakout fame is a testament to that, with three titles changing hands in just one night. But whether Thug Rose is champion by the end of this year doesn’t really matter, the unique lead-up and her accomplishment at UFC 217 will live forever in MMA history.