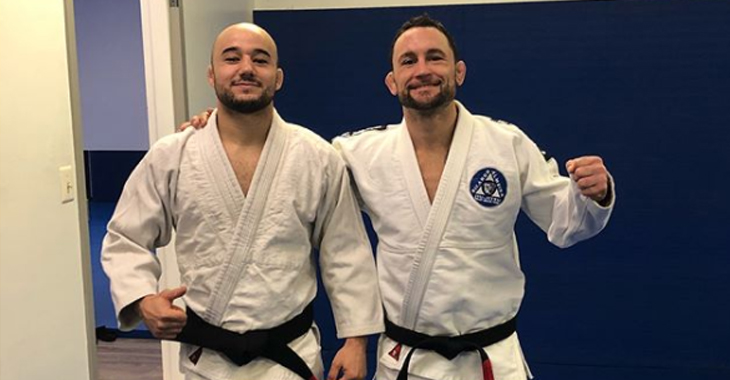 Things are finally looking up for former UFC featherweight title challenger Frankie Edgar. He was slated for a title shot against Max Holloway, but had to withdraw due to an injured orbital. Not only does he get another shot, but just a day after his fight with Holloway is re-booked for UFC 222, he got bumped up to first degree black belt. He wasn’t the only fighter getting the honors from Ricardo Almeida, his teammate Marlon Moraes got promoted from brown belt to black belt.

“Such an honor to have these guys on our mats day in and day out. Congratulations gentleman. Marlon Moraes: Congratulations on your black belt, six years as a brown belt and I tried to promote him last year but he wouldn’t accept it. You won’t find a more humble guy. Frankie Edgar: Black belt first degree. Our team leader/captain always setting the pace we all try to follow.”

Such a big honor to get brown belt from professor @ricardoalmeidabjj and congratulations my brothers Marlon he is black belt now 😎. And Ramazan with Purple belt pic.twitter.com/crHXsmkLmq

“Tom Deblass: Black belt third degree – one of our OGs who started when we were still in a racket all court and helped us built the team. Tim Urvaliev: Brown Belt. The original Dagzilian, the first brother from Dagestan to come reinforce our team. Ramazan Kuramagomedov: Purple belt. The younger Dagzilian and the future. This kid with one year of BJJ training took second at ACB Jiu Jitsu World Championships in Russia.” — Ricardo Almeida on his Instagram.

Is this some sort of omen? While Frankie Edgar is no slouch on the feet, his bread and butter is pressuring with takedowns and his brawling wrestling style. If he gets Max Holloway down, who has his own impressive submission victories, he’ll look to counter that ground game and perhaps even snatch a submission of his own. Meanwhile, Marlon Moraes seemed like he was a shoe-in for a fight with Jimmie Rivera, but it looks like that never got finalized.