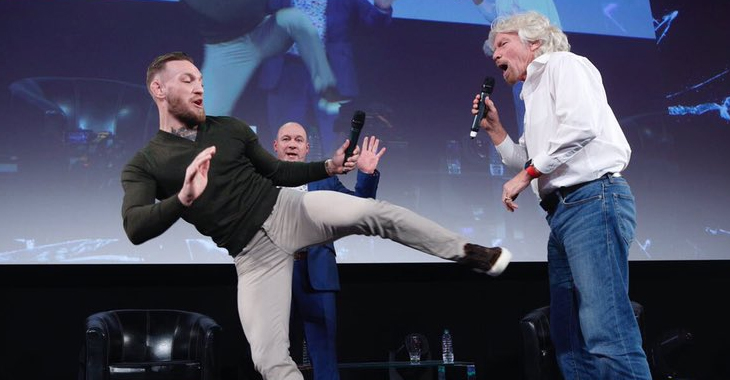 All the talk of last year was the showdown between Floyd Mayweather and Conor McGregor. Today, another billionaire shared the stage with a millionaire at the Pendulum Summit as it took over the Convention Centre Dublin. English business magnate Sir Richard Branson met with the UFC’s self-proclaimed ‘Champ Champ’ and presented him Pendulum’s inaugural Lifetime Achievement award. Of course, with two entrepreneurial icons of that caliber on stage, it couldn’t be just any normal presentation.

“Pendulum Summit is the fastest way to supercharge yourself, your team and your business. The event has grown from 600 attendees in 2014 to over 6,000 raving fans in 2017. Pendulum’s contagious energy and mind-blowing content has brought about marked change in people’s lives and has created an expanding community of like-minded individuals who have an insatiable appetite to lead a more successful life.” — Pendulum’s official website. Richard Branson knelt down and gave Conor McGregor the sparkling crystal award and McGregor decided to knight him proper. It wasn’t long before the shirts came off and the two were staring down each other bare chested. The two looked like they were having a blast. There’s no telling what business tips the two could share over a couple of fingers of whiskey, most likely poured from the Irishman’s own brand of fire water.

The year hasn’t even begun really and Conor McGregor is already meeting with billionaires and getting awards. It doesn’t take a rocker scientist to see why McGregor is just sitting back and waiting until a deal is sweet enough to get him to return to the Octagon. From Tony Ferguson, Nate Diaz, to maybe even Georges St-Pierre, even the biggest fights will have to wait until he’s ready.