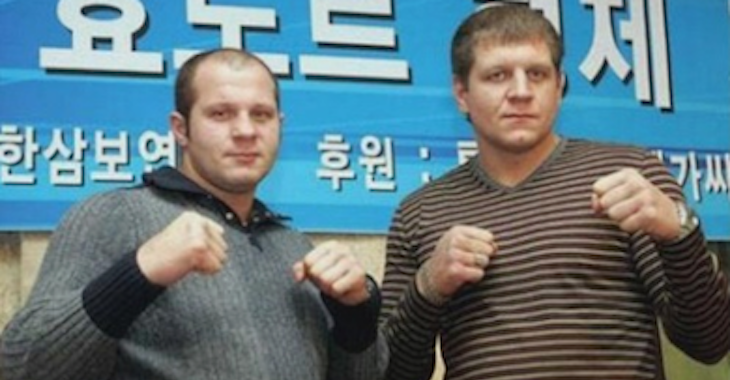 The Emelianenko brothers seem to be quite the opposites and it shows with their current relationship. According to Alexander who spoke with sovsport.ru recently, the two MMA siblings have not spoken to each other in the last 10 years.

The tattooed Alexander recently made a return to MMA competition in September following an 18-month prison sentence after being convicted of sexual assault. After a successful return to MMA, Alexander opened up on his relationship with his older brother. “Now he surrounds himself with ‘friends’ who follow him around, and will never tell him the truth, fearing to lose beneficial ties. It’s only sycophants around him,” Alexander told sovsport.ru (translated by RT Sport).

Fedor then responded on the same media outlet with an open letter to his younger brother (translated by RT Sport).

“Usually I don’t comment on other people’s statements. But I cannot remain silent. This is my first and last answer to you. I consider it beneath my dignity to constantly react to your lies.

“And now the most important thing – why I decided to make this open appeal to you: you called my relatives sycophants. Sycophant – that’s you, Judas. I feel sorry that people who were close to you and supported you in hard moments are now suffering. I personally have apologized for you to dozens of people.

“You can say what you like about me, I’ll endure it, but do not dare to insult those close to me. Besides, you don’t even know them. And all those whom you know helped you and played an important role in your life. And you are not worth their little finger. Therefore, you are not in my circle.

“In one of your interviews you said that you can help me. But I do not understand how you, [someone] who was released [from prison] not long ago and is known for constant violations of his training regime, can help me. I can only think of one thing – not to dishonor the family name of me and my parents!”

Fedor also made a return to MMA competition in 2015 after retiring in 2012. The older Emelianenko brother has gone 2-1 since coming out of retirement with his most recent fight being a KO loss to Matt Mitrione at Bellator 180 in June.