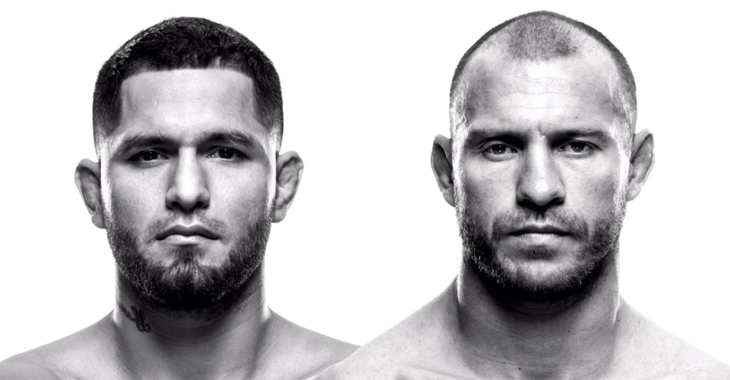 Jorge Masvidal is more than excited to meet Donald “Cowboy” Cerrone in the middle of the Octagon at UFC on FOX 23 on January 28.

Masvidal was a guest on Wednesday’s episode of BJPENN.COM Radio and told host Jason “Kinch” Kindschy that he knew it was just a matter of time that he would be fighting Cerrone, and now is looking to step in front of him in the rankings at welterweight for his climb up to a title shot. “We were always at 155 and I always knew inside that we were gonna get it cracking one day. I’m prepared for anybody — whoever’s on top is who I’m preparing for.”

Regarding his animosity toward Cerrone, “Gamebred” says that this is a win-win for him with getting to fight an opponent he has a grudge against and with a win propels him towards the title.

“It’s a combination platter for sure. A part of me doesn’t really like him too much. He’s taken fights away from me in the past, top ranked opponents and for some reason they gave them to him, that never sat well with me. The part of this is that I need to get past to him to start the next stage of my career, which is getting the belt. So this is a huge step. I have to have to pass this test with an A+.”

In response to a comment Cerrone made saying that he has only seen Masvidal’s last fight, which was an “accidental” TKO win over Jake Ellenberger, “Gambred” says that Cerrone is steering far from the truth.

“That guy has seen all my fights, I can tell you that much. He can tell the public and the media whatever but he’s seen all my fights, man. That dude is a little delusional. I pray to God that he’s overlooking me. I hope he isn’t waking up early and doing that running in the desert that he’s accustomed to. I hope he overlooked me, that would make the fight even more easy. Hashtag ‘Easy Money.'”

“With beating him I should already be in the works for a title shot. But you don’t know with this sport, it’s a popularity contest half the time. Maybe after beating him I’ll have to get into a fake fight with Justin Bieber or something, I don’t know.”

Masvidal added that he is ready to rain on Cerrone’s parade, as their fight takes place in “Cowboy’s” hometown of Denver, Colorado. “I’m set up to spoil the party. I’ve been fighting in peoples backyards for many years and that’s one of favorite places to spoil their party.”

As far as last words go for Cerrone, Masvidal sent “Cowboy” off with a clear message.

“Anything that I would say to Cerrone that I would say to his face? This ain’t no sparring session, I hope you come prepared. I hope that you got intimidated by my presence and that you come here at 100% to compete. ‘Cause people like to say shit for him like he doesn’t compete well when guys come to fight. I come to fight, man. I want the best Cerrone that’s ever lived and ever walked this planet on Saturday so that when I kick his ass out of the game, there’s nothing left to be said.”