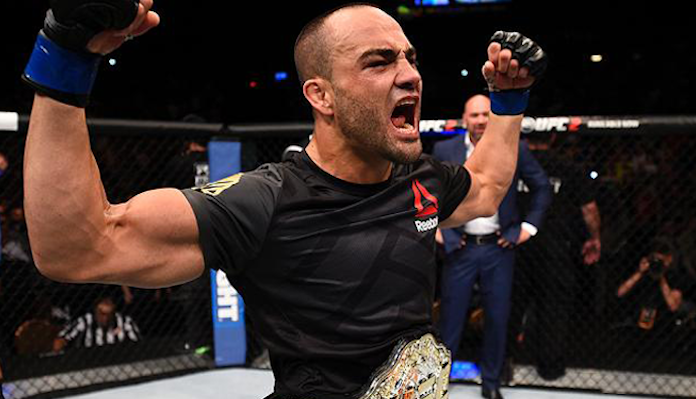 Former UFC lightweight champ Eddie Alvarez, who is now set to rematch Dustin Poirier in the main event of the UFC’s July 28 return to Calgary, Alberta, Canada, is hoping that a big win will position him for a title shot opposite reigning lightweight champ Khabib Nurmagomedov. That being said, Alvarez doesn’t seem to be particularly impressed by Nurmagomedov. In fact, he seems to find him boring.

During a Thursday night Instagram live session, in which he also admitted he’s not excited about his rematch with Poirier, Alvarez gave his take on Nurmagomedov. Apparently, “Khabib time” is synonymous with bedtime in his household.

“I don’t care if you’re Russian,” Alvarez continued. “I love Russia. I fight more like a Russian than Khabib does. Russia loves me. I’ve been in Russia before. I fought in St. Petersburg. I fought for the Russian audience, but I fought, I didn’t wrestle no one. Everybody goes to sleep during Khabib time.”

Eddie Alvarez last fought in December, when he knocked out former World Series of Fighting lightweight champion Justin Gaethje in a 2017 Fight of the Year contender.

Khabib Nurmagomedov, meanwhile, last fought in April when he defeated Al Iaquinta by decision in a last-minute matchup. This win earned Nurmagomedov the lightweight title that had been stripped from Conor McGregor.