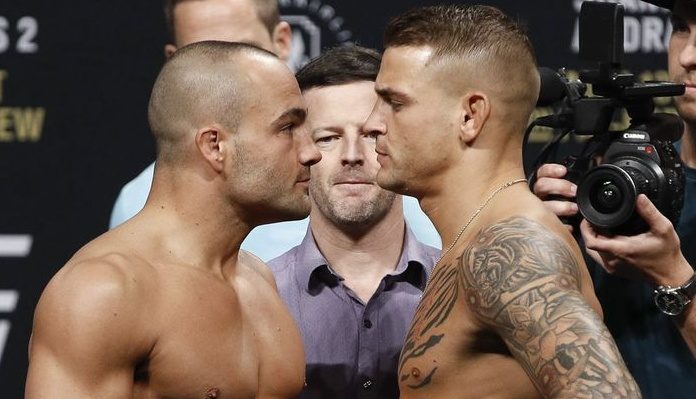 Eddie Alvarez and Dustin Poirier, who meet in the main event of UFC Calgary on Saturday night, have shared the cage once before. On the night they first met, they pounded each other black and blue, but ultimately ended up with a disappointing no contest after Alvarez landed an illegal knee.

Despite the fact that they’ve shared the cage before — and gave each other hell — Alvarez still does not feel that Poirier is on his level. In fact, he considers Poirier an “undercard fighter.”

Eddie Alvarez explained why he feels this way shortly after the UFC Calgary open workouts this week.

While Alvarez doesn’t seem to think Poirier is on his level he assures he has nothing but respect for Poirier — even if Poirier doesn’t like him.

“I respect everything this man’s done,” Alvarez said. “Everybody who’s on this journey in the lightweight division, everybody’s tough. Dustin’s went against the best guys, put on hell of fights. He’d be a fool to think that about me. He don’t know me. Personally for him to say, ‘I don’t like him personally,’ that’s foolish. He don’t know me personally.”

Who do you think will come out on top when Dustin Poirier and Eddie Alvarez collide again in the main event of UFC Calgary this Saturday night? Join the debate in the comments section below.