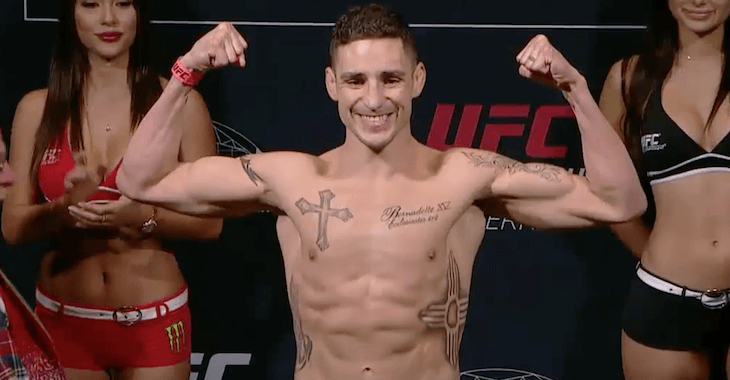 Diego Sanchez will return to the octagon for at least one more fight when he takes on Polish leg-lock specialist Marcin Held on November 5 and UFC Fight Night 98 in Mexico City.

Sanchez is coming off of the first knockout loss of his career after Joe Lauzon made quick work of him in the first round of their UFC 200 bout.

Fans and fighters alike were unsure whether or not that would be Sanchez’s last fight in the UFC, but Tuesday’s announcement of his upcoming fight with Held puts that idea to rest.

Meanwhile, Held will be making his UFC debut after a lengthy career in Bellator, where the Polish standout won season 10 of their lightweight tournament but ultimately fell short of Bellator gold in a decision loss to Will Brooks last year.

Held (22-4) will enter the Sanchez fight coming off of a win over Dave Jansen in May. Held signed with the UFC in August and will look to make a splash in his new promotion with a win over Diego Sanchez, who has had a storied career in the octagon.

“The Dream” began his UFC career on the now infamous first season of The Ultimate Fighter, where Sanchez competed at middleweight. After several fights at 170 pounds, he eventually found his home in the lightweight division, where Sanchez fought former champion BJ Penn for the 155 pound belt back at UFC 107.

UFC Fight Night 93 will take place on November 5 in Mexico City and will be headlined by Rafael dos Anjos vs. Tony Ferguson.

Who do you see winning between Diego Sanchez and Marcin Held? Will the newcomer debut in the UFC with a win over a long-time veteran? Or will Sanchez pick up a much-needed victory? Sound off, PENN Nation!