Earlier this year, TMZ reported that Rockhold and Lovato were dating but not much was seen of the stars together.

The UFC fighter and pop star singer posted similar photos on their social media channels of a happy face on their pinky fingers months ago, which was the biggest sign of any connection between the two.

However, on Sunday, both Rockhold and Lovato posted the same photo together.

Rockhold posted the photo first to his social media and tagged Lovato without any caption. Lovato followed up a few hours later with the same photo tagging Rockhold and said in the caption, “About last night..”

The two stars were in New York for UFC 205 as they were seen holding hands on their way into the historic UFC event held at Madison Square Garden.

Demi Lovato and UFC fighter Luke Rockhold hold hands in first public appearance together. Do you ship it?😍💕 pic.twitter.com/yX78aBku4p

Lovato and Rockhold apparently found a connection when the pop singer was training at the Unbreakable gym in Los Angeles earlier this year and the two hit it off, according to TMZ. Lovato is a huge fan of mixed martial arts and gets in the mix with training in the sport as well. 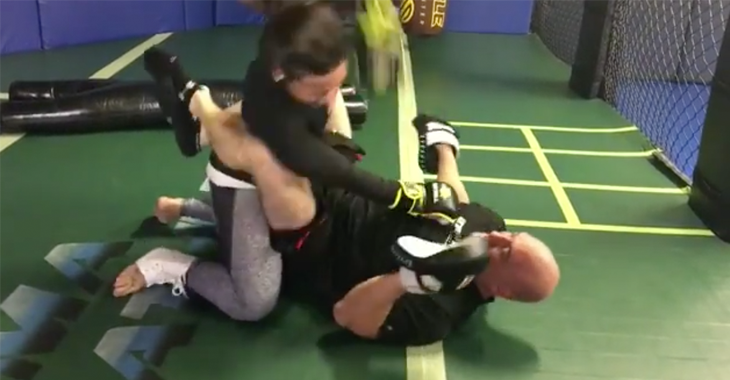 Rockhold is currently recovering from an injury that forced him out of a rematch with Ronaldo “Jacare” Souza. It was a big fight scheduled as both Souza and Rockhold are looking to solidify their case for a shot at Michael Bisping and the UFC middleweight title.

Rockhold’s last fight was against Bisping at UFC 199 where he lost the title in his first title defense after becoming the champion by beating Chris Weidman at UFC 194.

Now with the injury keeping Rockhold on the sidelines and Romero’s devastating finish of Chris Weidman at UFC 205, UFC President Dana White has stated that putting together a Bisping vs. Romero fight “makes sense.”