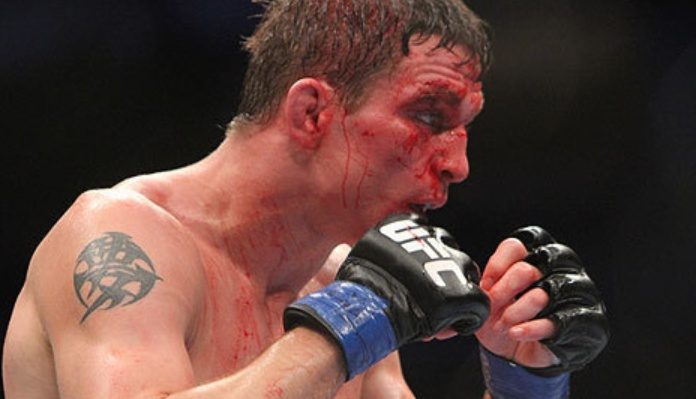 When a fighter personifies the definition of a gritty warrior, one might think that they would be given their proper due and respect. This is not that case.

Inequity is a disease in MMA that will always be spreading to those it shouldn’t. But that doesn’t make it right or okay. Somebody has to point out everything wrong with these instances.

Let’s do a quick example. Say you do six days of overtime at your job in an effort to boost your chances of getting a promotion. Then you have a fellow employee who only does two days but for one of those days he went home early.

If the person who did one and a half days of overtime got the promotion over the guy who did six that wouldn’t make a lot of sense or be very fair now would it? Well, welcome to UFC logic.

Darren “The Damage” Elkins personifies grit as a fighter and his style proves it. Always working and willing to grind things out to earn an ugly win (ugly for his opponents that is).

A lightweight for about half of his career, Elkins would eventually drop down to featherweight where he has gone 13-3 since doing so in 2011. Currently riding the third-longest active winning streak in the UFC’s 145-pound division with six, he ranks only behind the two very best fighters in the division, Brian Ortega (7) and the champion, Max Holloway (12).

The UFC and their panel of rankings media members apparently couldn’t care less about Elkins’ impressive streak and improvements since moving to Team Alpha Male as he is only ranked at No. 10. A ranking that happens to place him behind Chan Sung Jung who has only fought once since 2013 with his lone win coming over Dennis Bermudez (who Elkins also defeated).

Even more of a complete slap in the face to the Portage, Indiana native is that the opponent he earned the highlight of his career against, Mirsad Bektic is now ranked three spots ahead of him despite having lost to him just this past year.

Forget “of the year”, Elkins’ win over Bektic at UFC 209 was one of the greatest comebacks of all time.

After being pummeled and dominated for two and a half rounds, Elkins dug deep as only he can to deliver the shocking knockout blows late in the fight to culminate in an explosion of physical happiness and relief for the victor.

As big of a moment as this one, it must have completely slipped the UFC’s mind as Bektic only needed two wins since then to jump over the man who handed him his only career loss (one of those wins being over Godofredo Pepey who also has fallen victim to Elkins on his run).

It’s simply incredible to see such a lack of respect shown towards such a “tooth and nail” veteran like Elkins. The man paid his dues and shows up to do his job each and every time out yet still gets treated like what he’s doing isn’t good enough. But wait…it doesn’t stop there.

A six-fight winning streak sounds like something that would prompt a high profile opponent to follow, correct? Maybe if we had a time machine going back to the UFC days where eight-fight winning streaks equaled automatic title shots (don’t tell Holloway, Tony Ferguson, and Yoel Romero about those days).

In Elkins’ next fight at UFC Boise on July 14th, he’ll be taking on the unranked hot prospect, Alexander Volkanovski. A lose-lose matchup proving that the UFC may actually have something personal against Elkins.

Just to clarify, there is nothing wrong with Volkanovski. He would have been dumb not to take this opportunity and he’s got a bright future ahead of him.

The problem is that the UFC even offered this fight to Elkins at all.

Do I need to repeat? Six fight winning streak, continually impressive and winning the fights he isn’t supposed to, ranked No. 10 but should 100 percent be much higher. Yet he has to fight an unranked fighter that presents him with a tough style matchup next.

Being a guy who will never turn down a fight, this should have been the one to do it but the UFC knew he wouldn’t. Because from the looks of it, a win won’t get him any closer to a title shot. Closer to a top 10 opponent sounds most likely…

Does the UFC just not want Elkins to flourish? We know that they have certain fighters that they want to fast-track into stardom (just look at Bektic’s ranking) but this is so blatantly offensive to one of the hardest working fighters in their entire organization that it shouldn’t go unnoticed any longer.

Hell, for all we know, the UFC could give him the Jon Fitch/Jake Shields treatment and cut him after this loss. Anything at this point wouldn’t come as a surprise, unfortunately.

Proving people wrong is what Elkins does best, but it’s safe to say that the damage has been done in one of the UFC’s biggest current cases of inequity.