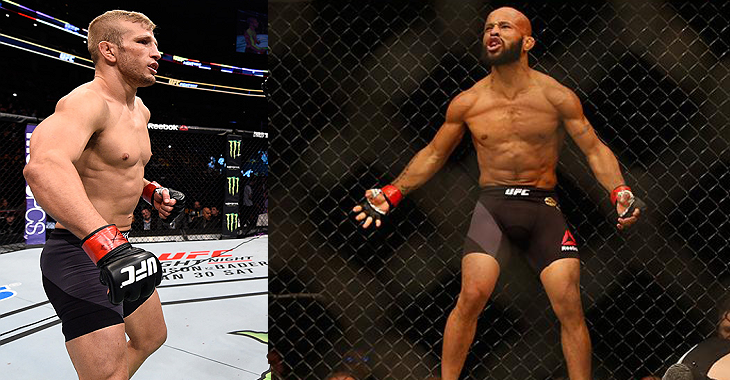 The UFC bantamweight title fight between champion Cody Garbrandt and former champion TJ Dillashaw is in jeopardy with Garbrandt trying to get a back injury healed up. The two are slated to fight for Garbrandt’s title at UFC 213 on Saturday, July 8, in Las Vegas, Nevada.

Garbrandt recently stated that he was going to Germany to have a procedure done on his injured back and the UFC and Dillashaw are awaiting to hear if the procedure has helped. Dillashaw however, is already eyeing another title fight if Garbrandt can’t compete and called out UFC flyweight champion Demetrious Johnson, which UFC President Dana White is already liking. “I was told that if Cody is out of the fight, which I am 99 percent sure he is, I will be fighting [Johnson] in August,” Dillashaw told ESPN. “I texted Dana White three days ago to ask what the deal was. He told me Cody had one more day of injections [in Germany] and then we’d find out what was going on.

Johnson told MMA Fighting that there are contenders in the flyweight division that are on a better streak than Dillashaw and it wouldn’t be a superfight because Dillashaw isn’t a current champion. Johnson said that it would just be Dillashaw dropping down a weight class and skipping the line to a title shot over all the contenders that have worked hard for a shot at the title.

“If this fight doesn’t happen, it really comes down to him not wanting to fight me,” Dillashaw said. “I’m cutting in line? Are you kidding? That was the weakest cop-out ever.

“I want to fight the best fighter in the world and I think he does nothing but tarnish his legacy if he doesn’t take it. He can’t call himself the greatest of all time if there are big fights coming to him and he’s turning them down. He wants to break a record fighting someone no one’s ever heard of? Why not make this thing epic and sell it? He’s been talking about getting paid; this is the way to do it.”

What are your thoughts on TJ Dillashaw dropping down to flyweight to fight Demetrious Johnson in his attempt to break Anderson Silva’s title defense record? Let’s get your opinion in the comment section!