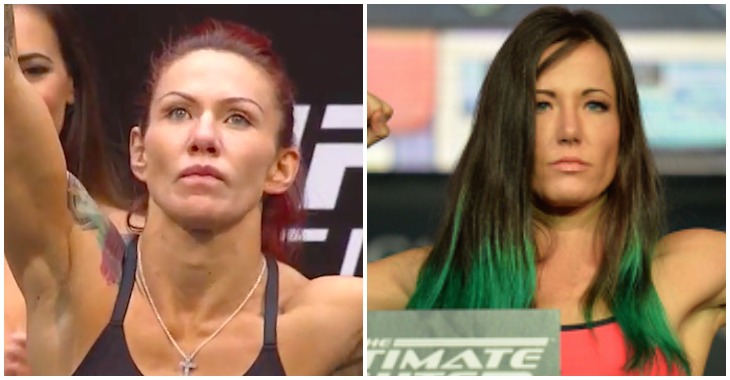 Last night, on the final evening of the UFC’s much talked about athlete’s retreat, top UFC women’s featherweight contender Cris “Cyborg” and strawweight fighter Angela Magana got in to an altercation. The altercation occurred after the Brazilian confronted Magana about some recent bullying posts.

Earlier this year, after Cyborg did some volunteer work at a children’s Cancer hospital in Brazil, Magana used one of the photos taken from the hospital visit to poke fun at the featherweight’s physical appearance:

Only 1 day to vote on #yourmajesty poll in previous tweet. Its anonymous you pussies. Who wore it better? Please see previous tweet to vote pic.twitter.com/ivLD7HD7vk

According to BJPenn.com’s Chris Taylor, Cyborg confronted Magana about these posts outside the fighter hotel, where she demanded more respect. After a heated exchange and a clear difference of opinions, Cyborg clocked Magana, apparently leaving her quite staggered.

Now, video of this incident has surfaced – though it is admittedly not great video. This video was acquired by CagePages, and can be viewed below:

Cyborg has gone 2-0 since joining the UFC, scoring lopsided TKO wins over Leslie Smith and Lina Lansberg. Since then, the featherweight star has been campaigning feverishly for a fight – ideally with reigning featherweight champ Germaine de Randamie – but has had little luck in this regard. Currently, she is angling for a fight with reigning Invicta champ Megan Anderson, who she had a far more cordial encounter with at the Athletes Retreat.

Magana, meanwhile, has not been seen in the cage since she was submitted by Michelle Waterson in July of 2015. With this loss, the strawweight stumbled onto a four-fight losing streak.