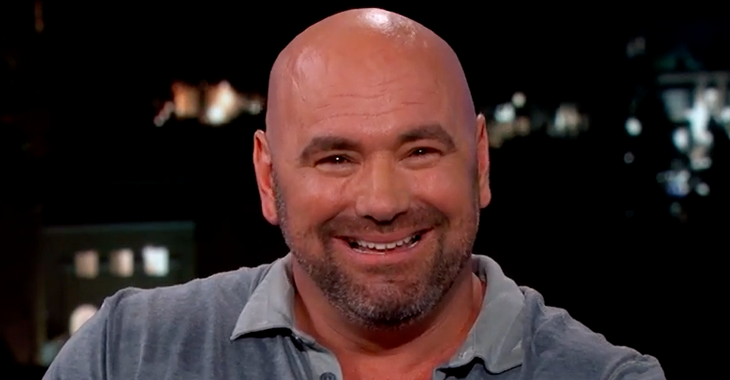 With everything Dana White has had on his plate lately, you’d think he’d be super stressed out.

From mass firings at UFC regional offices to disputes with two of the promotion’s most beloved former champions, UFC president Dana White spoke to TMZ.com and touched upon some of the recent issues within the promotion.

Check out what Dana had to say about Anderson Silva’s apology and Georges Saint Pierre’s contract situation!

“I don’t know man, we will see how it all plays out,” White said of GSP’s contract to TMZ.com.

The former welterweight kingpin hasn’t fought since narrowly winning a split decision over Johny Hendricks at UFC 167 back in 2013.

With GSP recently revealing his desire to return to mixed martial arts, the MMA world was shocked to hear that he was looking to explore the free agency market and wasn’t too keen on re-signing with the UFC.

White was pretty tight-lipped on the GSP contract situation, but was far more complimentary of another former champ who’s been airing his grievances lately.

The UFC president addressed Anderson Silva’s recent apology following several complaints lodged at the promotion. However, White appeared to be ready to put that in the past.

“Of course (I accepted Anderson’s apology). I love Anderson Silva. “I told ya that he had nothing to complain about.” Silva had made comments recently where he reprimanded the UFC over it’s treatment of Brazilian fighters, specifically over Jose Aldo’s dashed promises of a rematch with Conor McGregor.

When asked whether the stress of the job and recent disputes with several of the UFC’s longtime former champs, the president of the world’s largest mixed martial arts promotion did not mince words in his response:

What do you think of Dana White’s response to GSP and Anderson Silva? Do you expect the long-time former welterweight champion to come to terms with the UFC and re-sign with the promotion? Sound off, PENN Nation!