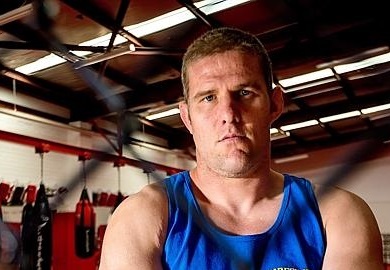 Dan Kelly is 40-years young and started Judo when he was seven years old. If you don’t like math, that means he’s been throwing dudes on their head for longer than his opponent Elias Theodorou has been alive. Their paths crossed initially in The Ultimate Fighter Nations house. Unfortunately, Kelly was defeated early while Theodorou later became the winner of the show. Despite losing their last respective fights, both Dan Kelly and Elias Theodorou went on to have success inside the UFC’s Octagon. Finally, Kelly will be able to prove who was  really the best fighter in the house at UFC Sydney.

“It’s a validation thing. I remember when I first got into the UFC it was about showing that I was at that level, that I belong there. I proved that now. But obviously this is about going, ‘I was the best guy on that show,’ and me getting the opportunity to fight [Elias Theodorou] is exactly that, it’s me going, ‘no, no, I was the best guy. I was. It just wasn’t my day in the house that day,’ and I’ve proven now, we’ve both got our own training camps and we both prepared fully and we’re both experienced now, we both have the same amount of fights that I’m the better guy.” “[Theodorou] will stay away. He’ll stay away and run around and dance around, exactly the same way he fought Sam Alvey is how he’ll fight me, I think. Yeah, I don’t think he wants to clinch up with me, which is what I’ll be trying to force him to do, but I’ve got some little tricks. I think I’ll be doing lots of spinning kicks, spinning back fists, flying knees. So, I’m gonna surprise him with a few new things. I’ve been drinking at the fountain of youth and 40 is the new 30 and I’ll be flying in there. Get ready for a crane kick.” — Dan Kelly to Submission Radio.

Not only does Elias Theodorou have 11-years on Dan Kelly, he’s got the trophy as well. While we don’t expect him to hand over that fancy engraved prism, Kelly would enjoy a moral victory over the TUF winner and back into the win column. Who will end up the real king of the TUF Nations house? UFC Fight Night 121 goes down in Sydney, Australia on November 19th and will be headlined by Mark Hunt taking on Marcin Tybura.